A Promise to Remember by Kathryn Cushman 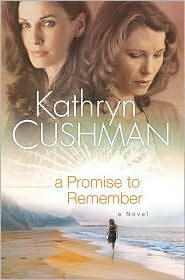 What led you to pick up this book? After reading Nancy Moser's historical account of Martha Washington's life in Washington's Lady, I decided that Christian fiction has made great strides and that I definitely desired to read more books written by Moser and/or published by Bethany House. Kathryn Cushman's book appealed to me from the moment I saw the cover. Thinking I'd just flip through it, I instead opened the book, read the first few lines and simply could not put the book down.

Summarize the plot but don't give away the ending. A Promise to Remember tells about two mothers whose lives intersect when their sons are both killed in the same car accident. Andie Phelps is wealthy and spends her time doing charitable work while Melanie Johnston is a struggling single mother. When Melanie sues Andie and her husband, people in their small town take sides and Melanie must deal with people whose belief systems clash with her own while Andie tries to make sense of her own life, marriage and faith.

Note about Christianity as a part of the story: Andie is a Christian and Melanie is not, although Melanie's deceased son Jeff was a Christian and so is her daughter Sarah. I found the book was honest about the fact that Christians are the same as everyone else: some are judgmental, some welcoming and open -- everyone is flawed in some way, regardless of what they believe. They're human, in other words, and with or without faith both women battled to make sense of their loss. So, again, I didn't find the book was overly preachy but that Christianity was shown simply as one facet of some of the characters' lives and that, even when surrounded by people of faith and with a core belief to lean on, one can feel very much alone.

What did you like most about the book? The characters seemed very real to me. Andie, wealthy as she is and in spite of appearances, is less comfortable with her life than Melanie. She has a lot of grief in her past and tries to use her own loss in a positive way (charity work) but she's a little bit of a wimp. She has let her perfectionist husband steamroller her into giving up painting -- the creative joy of her life -- and she lets some of the other wealthy women walk all over her. Melanie, on the other hand, is strong because she has no choice, but she's also damaged. She's my favorite because she's forthright and doesn't tippy-toe around anything; she simply speaks her mind.

Share a favorite scene from the book. It would give too much away if I mentioned the scene that meant the most to me, but I found the last 50 pages of the book particularly meaningful.

Recommended simply because I thought it was a very good read. I found that even though there were aspects of the book that I questioned (I'll get to that in a minute), the story pulled me along. I cared about what was going to happen to Andie and Melanie.

In general: My chief complaint is the timing. When the book opens up, less than a week has passed since the accident that took the lives of two teenage boys. I've been through a lot of loss in my life and I can't imagine that a mother who lost a child could function with any sense of normality after such a short time period. In fact, my mother's funeral didn't even take place until 5 or 6 days after her death and I recall waking up and crying the moment the loss of my father hit me, daily, for months. I didn't feel like myself for a good two years, after my father's sudden death.

The loss of a child is much more crippling than that of a parent, so I had trouble with the fact that both women seemed to be in better shape than expected. However, because the two women are not completely numb or totally unable to function, the story wasn't the painful read it could have been. There were only a few times that I bubbled up. When I first read the cover blurb, I was afraid I wouldn't be able to get through a book about that type of loss; but it was readable, if not accurate to the depth of emotions, and I'm very glad I read it. So far, Bethany House is 2 for 2.

Cover wars: There's been so much talk about covers, for better or worse, lately, that I think the cover of this book bears mentioning. Does the cover fit the book? Yes, except for the confident look of Andie, on the left. The two women pictured closely fit the physical descriptions of Andie and Melanie. There's an image of shattered glass that works well for the accident theme and both women eventually end up on a beach (both alone and with others). Very fitting design. Kudos to the cover illustrator.

Next up should be a review of Princess Academy by Shannon Hale, which I hope to finish reading this evening.

I'm going to go ahead and skip wahoos until I can think straight. I can't wait to get my last trip to OK over with and just settle into my own home for a while!!!

Happy thoughts all around!
Posted by Bookfool at 6:05 PM