The drive from Oklahoma and other jazz 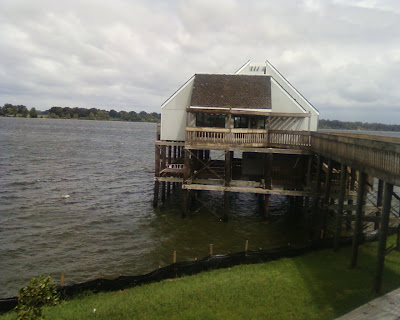 I'm finally back in Mississippi! Squee! Yesterday was the big driving day, home from Tulsa. Above is the Lake Village Tourist Information Center in Arkansas (taken with my new phone camera, which is total crap but better than nothing), a regular bathroom break stop on the route home. It's hard to see, but the tropical storm was whipping up like crazy and there were lots of whitecaps (only one is visible -- don't ask me why; I'll just blame the camera). I walked into the building and the fellow who works there said, "Power's out." I said, "Okay, I guess I'll just have to use the bathroom in the dark, then!" Like I was going to wait for a McDonald's.

About a half-hour after Lake Village, I hit the tropical storm, around Lake Providence, Louisiana. Civil War buffs probably know the place the storm let loose: Soldiers' Rest in Lake Providence. Across the road from Soldiers' Rest is a cemetery that I'll have to check out someday -- a tomb with a carved marble soldier in Civil War regalia dominates the view from the road. From there on, I was occasionally mumbling at people who drove too fast or didn't bother to turn their headlights on as visibility dimmed. As I told Carrie K., at that point God cracked the tropical storm egg and out fell the yolk of yuck -- the kind of rain that windshield wipers simply can't keep up with. It was bracing. But, I made it home fine.

While in Oklahoma, I finished:

I spent a lot of time on the road and very little time on the computer -- and I didn't even break out the laptop -- so I hand-wrote my review of A Promise to Remember and will try to get that typed up, tomorrow.

I'm finally really "getting" The Words of War (dispatches during the Civil War by reporters from The New York Times and The Charleston Mercury, along with a brief account of what historians say) by Donagh Bracken. Because I'm so thoroughly ignorant about the Civil War, I bought an atlas of battles, as I mentioned earlier. But, neither book is for those who are totally unfamiliar with either the geography or the personalities involved in the war; and I've had to really study the maps to figure out who was who and what was where. Fortunately, I'm a nerd and even though it has sometimes has felt a bit like "homework" reading the two books, the truth is that I always did like homework. My husband claims that's one of the keys to Bookfool: "You love learning more than anything."

Suddenly, everything began to click, this weekend. The problem was that I had to look back and forth, back and forth, figuring out who was on each side. I knew Grant was a Federal and Gettysburg is in Pennsylvania, as well as the fact that Port Gibson, MS, was, "too beautiful to burn" (and, of course, I know about Vicksburg), but that's about it. Seriously, I knew that little about the Civil War. So, I'm about 2/3 of the way through the war and it's just now finally clicked. I know Bragg, Hood, Sherman, Hill and Longstreet are Rebel names, for example. Till they finally sank in (around the time Longstreet was struck in the shoulder by his own men in The Wilderness), it was taking me hours to get through a single battle. I have learned a great deal. I'll have to travel home one more time, though, so it's possible that you won't see a review of The Words of War till next week. We'll see. I'm loving it, at this point.

Playlist for the road:

Jack Johnson - In Between Dreams (this has become an all-time favorite album)
B. B. King - Why I Sing the Blues
John Mayer - Continuum
Steven Curtis Chapman - This Moment (The song "Yours" makes me bawl, since hearing the new verse about the loss of his daughter, Maria Sue, so I end up mopping my eyes at that point -- probably not good to listen to while driving -- "Cinderella" also gets me)
Three Doors Down (self-titled album -- this one is my youngest son's fault; he left it in the CD player)
Disc 3 of Journey to the Center of the Earth, audio (but it was putting me to sleep, this time, so I canned that).

I am currently reading:

Princess Academy by Shannon Hale and, of course,
The Words of War by Donagh Bracken

Talk of the Town by Lisa Wingate

If roadkill was dinner, yesterday we would have eaten:

Armadillo with a little raccoon side dish

Hope everyone had a fabulous week! I'm ready to get this estate-clearing business over with, and hope that things will stabilize after the last trip home, this weekend.

Bookfool, buried in little trinkets that I'll probably end up wanting to sweep out the door
Posted by Bookfool at 11:26 AM