Get Smart! How e-mail can make or break your career And Your Organization by Mary Lynn Pulley & Jane Hilberry 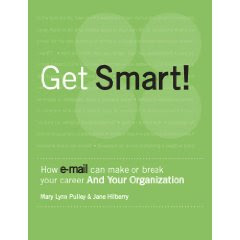 Get Smart! How e-mail can make or break your career And Your Organization
by Mary Lynn Pulley & Jane Hilberry
Copyright 2007
79 pages
Author's website

Have you, in the past few weeks, received an e-mail that irritated you, that mad you angry, or made you cringe? Did it change your opinion of the person who sent it? Have you ever become so exasperated or offended by a colleague's e-mails that it undermined your respect for the person? When you see an e-mail that was sent by a particular person do you dread opening it -- or automatically delete it without even bothering to read it?


The above cover blurb captured my eye, as there are definitely people I consider my e-mail favorites and some whose frequent forwards have become "automatic deletes".

My husband brought this book home from a management training seminar and asked me to read it and share my thoughts. We've just recently begun to share some titles and are enjoying lively discussions about them. At 79 pages, it's a quick gulp of a read.

When I saw the book, my first thought was that the cover doesn't speak to its intended audience. "Get Smart" is, of course, a classic television series and a recent movie release. The title alone should refer to e-mail a little more directly -- maybe a name change to something close to the "You've got mail" theme would work, with the boxy envelope we've come to recognize as the symbol of e-mail.

Regardless of the cover, the content is good. The book is geared toward business, but it could very generally apply to everyday conversations by e-mail. It begins with a self-assessment, a brief quiz that gives you an idea of just how professional or how far off-track your e-mail mindset may be. The authors then describe how e-mail can make or break a career, focusing on the pitfalls of poorly-worded emails and how to avoid them. I like the way one of the cover blurbs describes the book:

What did I like most about the book? The authors do an excellent job of helping to reformulate how you think about e-mails with a set of 7 guidelines, such as "Is it culturally savvy?", ""What would your lawyer say?" and "Would you want it to appear in The New York Times?" The latter question leads to a sobering thought or two. E-mail is, they show, not the private form of communication that we often think it to be. In fact, organizations in the U.S. must be able to provide records of e-mail communication from their computers as evidence, in the event of legal action. E-mail can easily be forwarded to the wrong parties with the touch of a button. And, a poorly-worded e-mail that angers an individual can easily be passed onward in a tremendous chain of destruction. E-mails have, as they show, ended up in The New York Times.

I can add personal experience to this comment, as I know someone who recently was driven from his home because of an e-mail apology. It was meant to diffuse a difficult situation, but legally it could have been construed as a confession of wrongdoing, although the sender was not admitting he did anything wrong. He simply meant to calm down an angry person in the hope of dealing with that party on an even keel. Who would have thought a personal apology could become translated into the words "legal confession"?

In general, I think Get Smart! could serve as an excellent tool in the workplace, to prevent the kind of blow-ups that frequently occur due to lack of understanding of how to craft an e-mail carefully. As I was reading, I thought about my eldest son quite a bit. He's a recent college graduate and new to permanent employment. There are some tidbits, such as a description of "emotional intelligence" and how the impact of our behavior on others is more indicative of success than I.Q. or technical skills (this is then parlayed into the e-mail topic), which I believe would be particularly helpful to young employees who are convinced that they'll thrive on those hard-earned college skills but it's just peachy to write business e-mail as if it were a text message.

I do think the stories within the book could stand some expansion. Occasionally, an example was given and I'd turn the page, expecting to read further about a poorly-worded e-mail and how it could have been altered to shed a positive light. Instead, I'd find myself moving into a completely different chapter. More examples, particularly poor e-mails reworded, would have added more depth and helped readers with practical application. The book needs more meat. But, there are some excellent topic headings and passing copies of the book around an office could help to stir up discussion about an important topic that's frequently overlooked. I was particularly fascinated with the story of "The Bla Bla Bla Heard Round the World."

Get Smart! is worth reading, but I'd advise the authors to go farther in-depth, in the event of updated releases.

Recommended, particularly for business applications, as the book is directed at organizations (but it wouldn't hurt for the rest of us to rethink how we write our e-mails).

Finished over the weekend: A Promise to Remember by Kathryn Cushman. It may be a few days before I can review this one, but I found it nearly impossible to put down. I may also be slow to update my sidebar, as I don't want to upload images to someone else's computer (I'm staying with my beloved in-laws).

Bookfool, Living on Tulsa Time
Posted by Bookfool at 11:07 AM