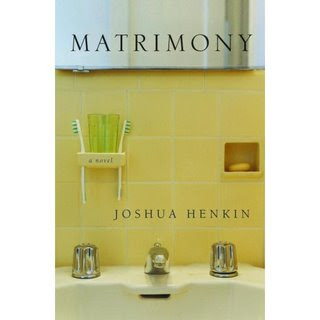 Matrimony by Joshua Henkin
Copyright 2007
Pantheon Books/Fiction
291 pages
Author's website
Careful visiting Joshua Henkins' website. I got so caught up reading the author's bio and interview that I lost track of time and forgot I'm supposed to be writing a book review. Oopsy.
I read seemingly a zillion reviews of Matrimony before my own copy arrived; bloggers everywhere appear to enjoy it. Ask me if I agree with them. Go ahead, ask.
Yes. I truly enjoyed this book. And, I'm going to tell you why, you lucky devil. But, first the brief synopsis, which I've borrowed from Nat at In Spring it is the Dawn:
It is 1987, and Julian Wainwright, aspiring writer and Waspy son of New York City old money, meets beautiful, Jewish Mia Mendelsohn in the laundry room at Graymont College. So begins a love affair that, spurred on by family tragedy, will take Julian and Mia across the country and back, through several college towns, spanning twenty years.
Starting at the height of the Reagan era and ending in the new millennium, Matrimony is about love and friendship, about money and ambition, desire and tensions of faith. It asks what happens to a marriage when it is confronted by betrayal and the specter of mortality. What happens when people marry younger than they’d expected? Can love endure the passing of time?
Now, a confession. I am having a terrible time writing this review and I have no idea why. So, I'm going to ask myself some questions.

Me: What is it about the book that makes you say you "truly enjoyed" it?
Myself: I found the book difficult to put down. It's not gripping in a "things happen fast" way but in the opposite way. Matrimony is a relationship story, about Julian and Mia, their friend Carter, their families, and the challenges they face. I found it gripping because, in spite of the fact that Julian and Mia are really nothing at all like me, I could relate to many of their experiences and struggles -- early marriage, self-doubt and grief, in particular. Parts of the book take place in Ann Arbor, Michigan, where my husband and I lived for a year. I enjoyed revisiting Ann Arbor as written by a man who really knew the city. And, Mia loses her mother to cancer, which I've just recently experienced.
Me: In what ways could you not relate to the characters?
Myself: Julian was spectacularly wealthy by birth. I assumed he was a trust fund baby and just had a pile his parents stuck in the bank because he always had access to money. That's foreign to me. I was reared by two of the biggest tightwads on the planet and money was something I earned or did without. When I was around 7, I grew pumpkins and dragged them around my neighborhood in a wagon, selling them for fifty cents a piece. I just couldn't relate to his financial freedom.
Julian decided to be a writer and his raison d'etre was all about writing the novel. I have never been able to imagine myself just going for the goal when it comes to writing. I'm still visualizing the "day job" I never got around to because I'm one of those weird 50's-mentality traditionalists who couldn't fathom leaving her children in someone else's care.
Mia -- not sure I ever fully understood her motives but her emotions in regard to her mother were all too familiar. This is exactly how I feel, right now, about my mother's house:
"You know what I think? They should make a law that after a person dies their house has to remain empty for a while. Let it lie fallow."
Me: What else did you like about the book?
Myself: There were some wonderful, realistic bits and pieces. The book is a nice mix of everyday life, quiet conversation, real-life conflict and upheaval, confusion and resolve. Life in the real world often doesn't contain a lot of action, but it does have plenty of ups and downs and it's realistic conflict that you read about in this book. As in real life, humorous moments are blended in. When Julian was teaching himself to cook, I was surprised to find that he took recipes as literally as I still do (always a problem):

Sometimes the recipe said "twelve baby carrots or two carrots peeled," but twelve baby carrots never equaled two carrots peeled, and he'd be lining up the carrots next to one another, trying to guess the right amount. Or "eight ounces of apple." Was that before you peeled and cored the apples or afterward? He bought a large spice rack, but he didn't know much about spices, so without regard for what they were, he moved alphabetically through the supermarket spice section, sweeping jars into his cart like a looter.

Me: You peeked at the reviews at Amazon, you naughty thing. What surprised you about the comments in the Amazon reviews?

Myself: I was surprised at the broad spectrum of ratings -- 1, 2, 3, 4, 5. I wasn't surprised that some people considered it dull because the cover makes it appear "light", in my opinion, and false expectation can lead to disappointment. Matrimony isn't fluffy. It's really what I'd term "literary". Literature often requires patience. You have to be willing to adjust to the pace. Also, one person thought the characters were "full of themselves". But, really, aren't we all? It's Julian's story and if you're telling your own story it's all about "Me, Myself, and I". The characters interested me; they pulled me in and held on. I cared about what happened to them.

Me: Poor editing drives you nuts and grammatical errors cause you to see red. What did you think of the writing?

Myself: Almost flawless. I'm not perfect, but I didn't spot a single technical error. There was only one annoyance: the use of the word "for", repeatedly. Occasionally, a semicolon in lieu of the same old preposition would have provided a nice break.

Me: Who else has reviewed it in the Blog World?

Myself: I'm going to cheat, here. Nat has a terrific set of links at the bottom of her review.

Myself: Recommended, especially when you're in the mood for a quiet, realistic relationship book. Not for times when you're yearning for action.

Me to Readers: Thanks. You're incredibly patient and tolerant if you made it this far. For the fun of it, here is my favorite sandwich from Zingerman's Delicatessen in Ann Arbor (the "Leo's Friendly Lion"), with gushy gratitude to Josh Henkin for getting Ann Arbor right: 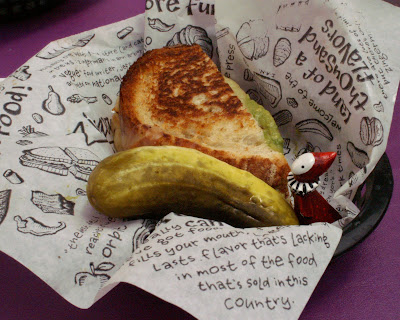 On this day in Bookfool's reading history, 1998: I finished The Third Twin by Ken Follett and began reading The Promise of Light by Paul Watkins.

Coming up: Belated wahoos and July in review.