Why Women Shouldn't Marry by Cynthia S. and Hillary B. Smith 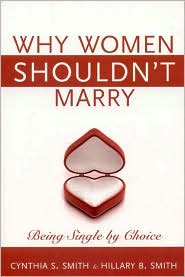 Why Women Shouldn't Marry: Being Single by Choice by Cynthia S. Smith & Hillary B. Smith
Copyright 2008 (updated from the 1988 edition)
Barricade Books/Nonfiction
214 pages

This particular book is obviously an odd choice for me, a woman who has been married for 26 years. I read it out of curiosity, more than for any other reason. The title implies that women should never marry, that staying single is the best option. But, the authors explain the title away:

When the first version of this book came out and was discussed on TV and radio shows, the inevitable interviewer-to-author question was: "Don't you believe in marriage? Your book tells women not to marry!"

The answer was: "This book does not tell women not to marry--but not to marry for the wrong reasons." [p. 22]

Occasionally, they do toss in a comment that supports that statement. But, in general, I found that the book discourages women from marriage, instead encouraging single women to give in to their paranoia about the little piece of paper that ties a man and a woman together legally. Some of the anecdotes are more than a little bit odd:

Vera was drawn to having affairs with married men because in doing so, she was only confirming her lack of respect for all men. In her view, their willingness to break nuptial vows only proved how untrustworthy, weak, and immoral they were.

She pointed out that she had never seen any happy marriages in her own family. Her aunt had married twice, both marriages ending badly. Her sister married a man twenty-five years her senior and was still together with him although Vera could not understand why. [p. 57]

Wait a minute! Just because Vera doesn't understand her sister's relationship doesn't mean it's automatically an unhappy relationship, does it? There are no actual supporting statements to that effect -- no quotes of angst from the sister. And, Vera has no respect for men or herself if she's the kind of person who chooses only to get involved with married men -- men who are both willing to break a vow and unavailable for permanent commitment. Immorality, in this case, is a two-way street. Are the authors saying it's better to have a series of flings than to marry a stable partner? If so, why? Is Vera happy or is she just an extremely confused woman? And, how about this woman:

She had a father who was never "there for us" and a mother who accepted the deprivation as women historically have done. She saw the marital male hierarchy of the dominant father and the subordinate wife, and the injustices imposed, and she feared that being married would make her view herself as one of those pathetic subservient wretches and would destroy her love for Paul and his for her.

"I meet women who think marriage gives them stability and reliability. I see it as doing just the opposite to me. It would make me shaky because I would lose confidence in myself and my own ability to make decisions." [p. 68]

That's interesting, but I think the quote reflects a particular woman's fears. I don't have a daughter, but if I did, I would advise her not to allow her fears to guide her. Confidence, self-assurance, ability to make decisions after weighing differing opinions . . . these things come from inside a person. Strength of character is always a positive. Marriage has not eroded my ability to make a decision, not one bit. I'm perfectly capable of making decisions and expressing myself. This comment, however, makes sense to me:

According to the American Heritage Dictionary of the English Language, the definition of loneliness is "Dejected by the awareness of being alone." Thus it is a condition that is not a fact, but merely a personal reaction to the situation of singleness. It's not the presence of people that prevents loneliness; it's the presence of a sense of self-adequacy. [p. 75]

It's certainly true that you can be lonely in a crowd. Marriage does not guarantee the absence of loneliness in any woman's life.

If the objective of the book is to encourage women to make certain they enter into marriage vows for the right reasons or to teach women how to enjoy their decision to remain single, I believe the authors have fallen far short of the goal. Instead, they perpetuate the myth that a married woman must be, in some sense, subserviant or lacking in character.

Here, we get back into the bitter category:

After you've cooled down, had your drink and dinner, and feel like talking, that's when you get on the phone and chat with friends to your heart's content, without annoying interruptions demanding how much longer you intend to blab and snide allusions to the motormouth propensities of women. [p. 77]

I read the above quote to my husband, who has never made a snide remark about my talkative nature. If anything, he seems to find me entertaining. Hubby reminded me of one of his co-workers. She is an incredibly effervescent, chatty woman with a magnetic personality. And, her husband likes her that way.

"When we eat dinner together, he sits quietly. He's relaxed and happy. I can't imagine that he's ever said anything snide about the way she talks. He married her because he loves her personality."

Chapter 14 consists of a series of letters thanking the authors for helping them to understand and justify their life choices, so obviously this book has helped some women to feel better about their choice to remain single. I think one of the joys of our current time period is that women do have options. It's no longer consided unacceptable for a woman to remain single or, if married, childless. But, there are far too many angry, sad, neurotic women described in Why Women Shouldn't Marry. I was personally disappointed that the book was less objective than I'd hoped. Women of all ages do still struggle with lifetime decisions, and I believe that all women must support each other in positive ways rather than focusing on the negatives. Both marriage and the choice to remain single have their ups and downs.

Now, just ask some of my buddies about how I babble on about my husband's flaws. Okay, yes, I'm probably not the right one to speak. Here's an excellent statement from the book:

If you meet the man you see yourself spending your life with--go for it. It is up to you and you alone. It may or may not end up a mistake--there are no guarantees in life--but it will be your mistake. Remember, what we are saying is women should never marry for the wrong reasons, and therefore you should examine your motivations before you leap! [p. 83]

Absolutely. While I wouldn't highly recommend this book because I think there are far too many negative stories -- and the pitfalls of living without the legal benefits of marriage are not mentioned at all -- I wouldn't recommend against reading it, either. If it helps any woman feel better about her choice to remain single, I'm all for it. But, I didn't find it very objective, myself.

Coming up next: A review of When Twilight Burns. Had to toss this one in first, as I'd forgotten to put it on the "to be reviewed" pile and wanted to stick with the order in which I finished reading.
Posted by Bookfool at 1:49 PM