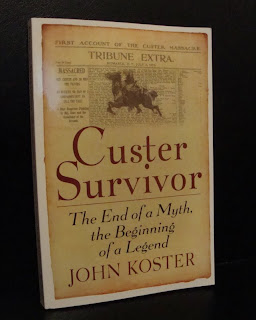 Custer Survivor: The End of a Myth, The Beginning of a Legend by John Koster
Copyright 2010
History Publishing Company - NF/History
220 pages, incl. Afterword, Bibliography, and Index
From the cover: It is commonly believed that the 210 troopers under Custer's command were killed to the last man. Careless military reports and inadequate record keeping allowed this belief to stand. . . .
Through carefully detailed research and forensic evidence, Custer Survivor reveals that the five companies were not killed to the last man. One trooper did escape from the deadly encirclement of warriors. He was the Second Sergeant of C Company. Custer Survivor is the story of the man, how he escaped, his ensuing ordeal and the subsequent years of his successful life. This is the book that corrects the record and makes complete the history of Custer's Last Stand.
Well, who could pass up reading about that? Certainly not this book addict and history buff. I knew the bare bones about the battle, but no details beyond the fact that Custer and his men were surrounded by Indians and slaughtered. So, Custer Survivor was yet another wonderful dive into history that I knew I'd enjoy.
I've struggled with reviewing this book because when I've written about Custer Survivor, it seems like I have a tendency to say too much. So, this is actually my third attempt. Good thing nobody is paying me by the hour (or at all -- that's for the FTC and IRS) to write this because it would cost them a fortune. Let me just say this: I thought the evidence was convincing but there's one thing that I thought was glaring in its absence and that is a photo of the man in question as a young army officer -- something with which to compare his features as both a young and older man.

The "forensic evidence" mentioned in the book's description involves documents with signatures by a man named Frank Finkel and a fellow who enlisted in the army by the name August Finckle. It's all explained in the book and I think the evidence is fairly convincing. Frank was too young to enlist; Prussians were much admired and he would make more money if he claimed he was a Prussian officer; Frank spoke German fluently because his family spoke German in their home and he was technically a deserter so he kept his counsel after his escape -- which sounds more like a function of his injured horse running away than an escape, actually, but I suppose that's beside the point.

The author explains how Finckle got away, how his horse figures into the evidence and how August/Frank became a deserter. Plus (news to me), the men who died were stripped by Indians and . . . nasty business . . . scalped, their faces hacked off so that they were only identifiable by body size and shape. All that makes sense. Without identifying features, uniforms and other objects on their persons, it's understandable that someone may have misidentified a body.

The only thing that really seems lacking to me, then, is photographic evidence. There are tons of photos in the book, but none of them show young August Finckle. Not one. When you look at the photographs, you can't help but wonder why on earth there is not a single photo of August, or Frank pretending to be August. It's apparent that soldiers were awfully fond of having their photos taken in uniform, individually and in groups. The author mentioned that record-keeping in those days was sloppy, but surely there is a photo of Company C with August Finckle in the ranks, somewhere. I'd feel a lot more comfortable comparing photos in addition to signatures.

Having said that, I still do believe the author presents a convincing argument for the possibility that a single man escaped Custer's Last Stand. And, I enjoyed reading the book very much, which I suppose is what really counts.

- Parts were a little confusing, but I found this book very readable and enjoyed the peek into history. Pretty well-written (not perfect, but clear enough) and convincing. Photos and documents add a great deal of perspective, even if the man in question is not shown as a young officer.

A side note of peculiar interest: The author and a man named Michael L. Nunnally have quite an entertaining and heated discussion going within the comment section at Amazon. Both have studied the deadly battle for many years and are a wee bit obsessed. I highly recommend that you traipse over to Amazon's Custer Survivor page to read the discussion. And, then you might as well buy the book while you're there (but I won't profit if you do) because it's awfully fun reading and I'd love it if some of you came back to tell me what you think about Frank Finkel. Was he genuine or just another fraud?

Many thanks to Don of History Publishing Company for the review copy.
Posted by Bookfool at 7:10 PM