What is he up to, now? A chat with Simon Van Booy 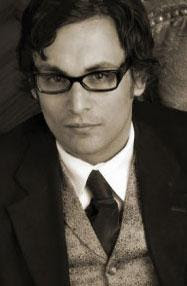 What is he up to, now? A chat with Simon Van Booy. (Photo by Ken Browar)

I wrote to Simon Van Booy to ask him some updated questions in celebration of the re-release of The Secret Lives of People in Love and he answered me from London!!! Argh, envy! This gal has to work very hard to tamp down the envy of such a well-traveled friend.

First of all, I asked Simon if there's anything new about the re-release of The Secret Lives of People in Love, or is it exactly the same as the Turtle Point Press edition? Simon said, "It's the wonderful Turtle Point edition, but with a long bonus story that you can't get anywhere else, and also a long P.S. section with stationary from all the eccentric hotels I've stayed in."

In case you haven't read my 2007 interview with Simon, let me fill you in on eccentric hotels. Simon loves to travel and he is crazy about authenticity. He doesn't stay in boring, Americanized hotels where the tourists typically go. He likes to be surrounded by the people who live and work in the locations he visits, often in offbeat places. He blends in, eating and dressing like the locals and speaking their language.

Both The Secret Lives of People in Love and Love Begins in Winter are full of stories of people who are filled with hurt or longing and the compassionate people who touch their lives in some way.

Simon told me about some of his favorite characters. "I really like Michel, the French ex-convict who takes care of the child and raises him as his own son [in "Little Birds" from The Secret Lives of People in Love]. Actually, I adore Michel. From Love Begins in Winter, I like George's ex-girlfriend's new fiance who suggested she call the real father of her child and invite him to Sweden [in "The City of Windy Trees"]. I also like the Polish priest from "The Missing Statues." I like all the eccentric side characters who help often help the main characters during their crises."

The next question was one that I've felt personally when writing. When you finish a story, do you feel like you're completely satisfied or do your characters ever return to haunt you? Simon says, "My characters haunt me and I'm not satisfied." He didn't elaborate, but I was happy with that answer because there's a part of me that loves many of Simon's characters so much that I want to know they continue to have a life in their creator's mind.

Since Simon enjoys moving from place to place to live in different environments and write using the settings he grows to love, I asked him to list a few places he'd like to live. Here's his list:

For those who are shy on geography (I rely heavily on the computer to fill me in), I looked a few of those locations up, just to make sure I knew what exactly he was referring to. That long, long third name on the list is the city in Wales commonly known for having one of the longest place names in the world. I think we can all guess Simon's listing it with a wink and a nudge, although he is Welsh and has mentioned to me that he would like to return to Wales to live and write, someday.

Hokkaido is in the northern part of Japan. From Google Earth, it looks remote and stunningly beautiful with snowcapped mountaintops surrounded by emerald-green trees. I couldn't even spot a single bit of civilization until I realized I was looking too far to the right. Oh, yes. People do live there. Yellowknife is in the Northwest Territories of Canada. Google Earth is showing me a spectacular lake nearby.

At this point, I'd say I would like to just skip right behind Simon, wherever he goes, but wait . . . Alabama and Arkansas? I've been to Mobile and Little Rock, of course. Neither is far from us and Little Rock is on the route home to Oklahoma. There are some beautiful little corners in Little Rock, but those two surprised me. Maybe they shouldn't. Simon has mentioned that he finds the heat of the Southern U.S. invigorating and he loves the people. He has lived in Kentucky and returns there, whenever possible, to visit his friends.

I asked Simon if he gets a lot of mail from his fans and he said, "I do, thankfully, and I adore them. I get about half handwritten letters, and half e-mail letters. I prefer the former because when I'm an old man, I'll have something to look at in between trips to the post office. I'm so grateful to anyone who reads my books, I can't even tell you, I want to shake their hands--actually hug them."

In the extra material (the "P.S." section) at the back of Love Begins in Winter, Simon described his scrapbooks, filled with notes and photos of the places he's lived or visited. I asked him if he took the photos used on the covers of his books and this is what he had to say:

"The covers are lovely aren't they? I'm very lucky. I don't know who took the shots nor the people in them--but if I did know, I'd put them in the acknowledgments and send them each a cake in the mail (you can do that now)."

Yes, you can. I recommend cake from Zingermans in Ann Arbor, Michigan, although it's a bit on the pricey side. I can tell you for certain that Simon has been to Ann Arbor.

Many thanks to Simon Van Booy for taking time out of his busy schedule to chat with me, again, and best of luck with the new release! Thanks, also, to Erica Barmash for her assistance and for sending me the photo of a very formal Simon by Ken Browar. I believe it's a couple years old and Simon has changed eyeglass frames. Someday, I hope to meet up with Simon, again, and snap some updated photos of my own.

Don't forget to sign up for my Super Duper Simon Van Booy Giveaway, which involves some pretty tricky rules (swearing on produce, for example) but is definitely worth the effort.

Also, I would like to extend my thanks to Roger Ebert for linking up to my blog, yesterday, making the little map at the bottom of my blog look stunningly crowded with stars. Hopefully, that link drew a little added attention to Simon, who is a very deserving author.
Posted by Bookfool at 10:31 AM