Island of the Swans by Ciji Ware 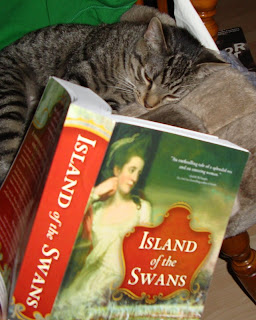 In case you're wondering about the kitten's droopy eyes,

Island of the Swans is far too entertaining to put anyone to sleep, although she did require a bit of help holding up the book.

is the story of Lady Jane Maxwell of Edinburgh, who became the 4th Duchess of Gordon. Jane was known as a fashion icon, patroness to Robert Burns, close friend and advisor to King George, a politically savvy, passionate and beautiful woman. The story takes place between 1760-1797 and focuses on Jane's fiery spirit, her place in society, her family life and a love triangle. I found a very interesting page in which Jane is featured as the Tart of the Week at a blog site about Jane's rival, the Duchess of Devonshire, which is well worth reading for a little background if you're interested in reading this splendid book about her life.

opens with a pig race between Jane and her sister, Eglantine, down the steep High Street in Edinburgh. Her best friend, Thomas Fraser serves as the judge and the scene is a delightful introduction to Jane, her family and Thomas. At the time the book opens, Jane, her mother and her sisters live in Edinburgh on the strict allowance doled out by her drunken, land-holding father who, in typical fashion, has chosen to banish his daughters but not his male heirs to a life of genteel poverty.

Thomas Fraser is an orphan whose family lost their land holdings after siding with Bonnie Prince Charlie in the dreadful Battle of Culloden. Although Thomas and Jane's friendship eventually turns to love, Thomas has no money or land and becomes a soldier to earn his keep. After he is presumed dead in an attack by Indians in the American Colonies, Jane marries Alexander, the 4th Duke of Gordon. But, Thomas is not dead. Jane's marriage is described as passionate but fraught with jealousy after the Duke realizes that Thomas will always hold Jane's heart.

is a little heavy on fairly graphic love scenes and angst about Jane's never-ending affection for Thomas, but the historical setting is rendered in such stunning detail that I was never bored or annoyed by the love triangle. Jane's life was fascinating. While her marriage may have been essentially loveless, she didn't let her husband slow her down. In addition to her political activities and the social whirl, Jane gave birth to six children and was a devoted mother.

- Meticulously researched and detailed; an engrossing read, highly recommended for history and historical-fiction afficianados. Apart from the fact that the book is romance-heavy (and I don't care for elaborate sex scenes), I was never, ever bored with this fairly densely word-packed chunkster and enjoyed learning about Jane Maxwell and the time period in which she lived. A family tree at the front of the book came in very handy.

My thanks to Danielle of Sourcebooks for the review copy!

Passages to the Past

- We adopted a 6-month-old tabby with white socks and bib on Thursday. Wahoo! It is wonderful having a fur baby in the house, again!! Sookie is her adoptive name, but we plan to rename her Fiona and are currently calling her Sookie Fiona, since she knows and responds to the name Sookie. She is playful and cuddly and we are besotted with her.

I need to review the following:

So Long, Insecurity by Beth Moore
The Things They Carried by Tim O'Brien
We The Children by Andrew Clements
The Wives of Henry Oades by Johanna Moran
The Last Surgeon by Michael Palmer

When will I get to them?

Your guess is as good as mine. Obviously, blogging has not held priority in my life, so far this year. I'm fine with that, but I do intend to review everything I read -- if humanly possible. This might be a good time to take up drinking, if I could tolerate alcohol and didn't happen to hold the opinion that all alcohol has the smell and taste of paint remover.

What else is coming up, besides (hopefully) at least 6 reviews?

At least 2 more drawings. I won a pair of reading sunglasses in a drawing at Book-a-Rama Chris's blog and love them so much that I asked if I could hold a drawing, as well. And, I'm going to help promote a new read-along program that I think is all kinds of awesome (a book giveaway comes with the territory). The book hasn't arrived, but I've heard it read aloud and I know I like it.