If a Tree Falls at Lunch Period by Gennifer Choldenko 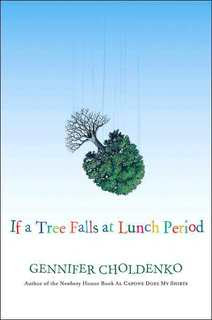 Kirsten is going through a really rough time. Her parents argue constantly and sometimes won't even talk directly to each other.

"Tell your father to leave you alone," my mom says.
"Tell your mother I'm just asking," he tells me.

Kirsten and her brainy little sister Kippy are very close. They often hang out together when their parents are arguing. Kippy is the only person who doesn't seem to care about Kirsten's biggest problem, the one her parents frequently mention when they're not fighting: her weight.

On the school front, Kirsten has started a new year and is shocked to find that her best friend has abandoned her for the popular crowd. But, the new boy -- a black guy named Walker Jones (aka "Walk), who has been sent from a dangerous city school to the exclusive, mostly-white private school -- and his new friend, Matteo, turn out to be decent allies. Walk even convinces Kirsten that homework and extra credit are worth the effort.

As Walk tries to survive and thrive in his new environment and Kirsten tries to survive on the home front, they are both stunned to find that they have more in common than they ever could have dreamed.

Gennifer Choldenko is probably best known for her Newbery Award-winning book, Al Capone Does My Shirts. I haven't made it through Al Capone, yet, (wrong mood when I tried it -- typical) but If a Tree Falls at Lunch Period grabbed me immediately. I absolutely loved the characters; even Kirsten's annoying parents were lovable and fun. Kirsten's angst about losing a best friend is realistic only to a certain point -- she finds new friends a bit easier than most outcasts and she's not anxiety-ridden in spite of all that's going on in her life -- but the story is not so much about the school experience as it is about prejudice, friendship, and acceptance.

4.75/5 - I loved this book. Great characters, terrific writing, excellent theme of accepting yourself and others for who they are rather than based on looks or color. The author has a sense of humor, so it's a nice, light read but one with plenty of meaning.

I bought this book with my very own money, earned by shoving my husband out the door regularly and sending him to travel the world without me.
Posted by Bookfool at 2:40 PM