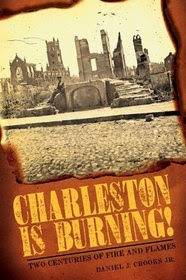 Charleston is Burning! Two Centuries of Fire and Flames
By Daniel J. Crooks, Jr.
Copyright 2009
The History Press
128 pages, incl. bibliography
The history of Charleston [South Carolina] in the eighteenth and nineteenth centuries was shaped by fire. Hundreds of infernos resculpted the face of the Holy City, carving out huge chunks of the town and scarring the landscape and its citizens as well. Each new generation learned from the last, keeping a leather bucket full of sand handy should the smell of smoke prompt an alarm.
What folks didn't learn so well was how to prevent the most common types of fires, usually associated with carelessness and neglect. Candles could not burn near drapes without the inevitable happening. Chimneys constantly caught fire . . .
--from the Introduction of Charleston is Burning!
Charleston, South Carolina has a history of frequent, devastating fires that I found so intriguing I wanted to read about it, so I purchased a copy of Charleston is Burning! while I was visiting the city. The book talks about early causes of fire and why the close-built, cheaply-timbered buildings easily flamed up and caused major conflagrations.
The author also describes the beginnings of fire regulation in Charleston -- or, at least, the attempts to educate citizens and convince them to follow some basic safety guidelines (apparently, not very successfully) -- as well as the changes in how fire was fought: first by general citizens forming a bucket brigade, then volunteers and slaves using hand pumps followed by steam engines, and eventually organized volunteer and (after 200 years of fires) paid fire departments.
There are lots of illustrations, photographs and excerpts from period newspapers and other documents along with a map of Charleston that is, unfortunately, marked in such tiny letters that I couldn't read most of them even with a pretty powerful magnifying glass. The illustrations and photos add a nice dimension to the book, allowing the reader to peer into history rather than just read about it blindly. I always love a book with plenty of photos.
While we were in Charleston, Cindi and I were headed toward the waterfront when we passed the main fire station. There are two older fire trucks on display at the station, as well as this beautiful old steam engine: 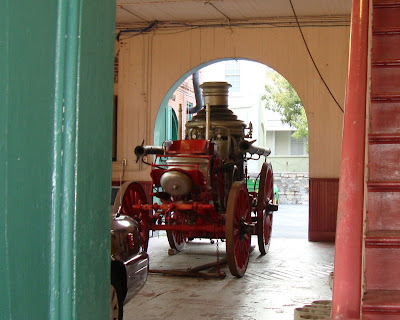 Thanks to Cindi for spotting the displayed relics! I really enjoyed Charleston is Burning! At times it could be a little dry and, of course, a bit repetitive. But, there were many different causes and effects of the various fires. Each fire described chose a different path and the excerpts from old documents really brought things to life. I was particularly fascinated and horrified by the way slaves were used to do a good portion of the hard labor involved in putting out fires and also frequently blamed for arson (often, apparently, to cover up carelessness on the part of others).
Here's an excerpt from the Mercury (a local newspaper) describing the June 26, 1826 fire, to give you an idea of how fascinating the accounts of the time were:
The devouring element, impelled by its violence, soon crossed over to the east side of King Street. It also extended down Boundary Street as far as the Orphan House, which noble institution was for a time in very imminent danger . . . imagination can scarcely conceive the fury and impetuosity with which the destructive element advanced . . . whether it arose by accident or design has not been ascertained. One man was severely mangled, we are informed, by the explosion of a house, and several others more or less injured
All possible praise is due to the zealous exertions of our citizens generally, and particularly to the labor and efforts and manly intrepidity of the different Fire and Axe Companies.
--from p. 43 of Charleston is Burning!
The bottom line:
A nice little book about the history of Charleston's fires, at times a bit dry but never for long. Particularly recommended to those who have been to Charleston or are interested in its history. Some of the descriptions about what burned and where will make little sense without either a map or some sense of context, but the history of the fire department and excerpts from historical documents are particularly fascinating. Since I just returned from Charleston, I knew the major streets and the lack of maps wasn't a problem, but I really would have liked to see some visuals that showed the burn areas a little more specifically than just aftermath photos (translation: I like maps). Charleston is Burning! is short at 128 pages, but includes 3 full pages worth of bibliography material. I do have two other books about Charleston, both fairly small, so I'm not done reading about Charleston, yet!
One last note:
I highly recommend printing out a map of Charleston to keep close at hand if you read Charleston is Burning!
Funny coincidence:
As I was writing this review, a volunteer fire truck pulled up in front of our house. We knew the house wasn't on fire and there was only one man in the truck, so Kiddo and I stood outside watching in fascination, eager to see what he was up to. 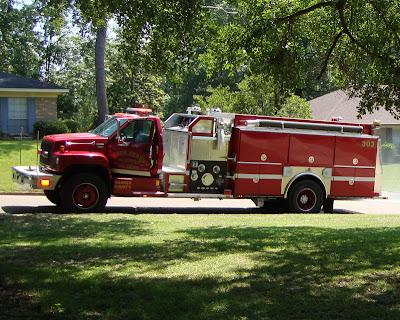 Aha! Probably related to the drop in water pressure we had, early today. Checking the fire hydrant and letting out some water. This was a pretty cool sight. Very entertaining. Kiddo wished aloud that he was younger so he could justify playing in the spray. 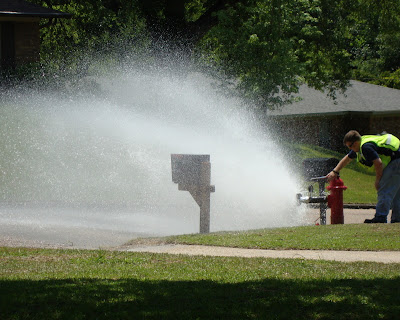 We just got that fire hydrant during the change of water pipes, last year. I have to say, it's awfully nice knowing there's a hydrant so near to your house.
©2011 Nancy Horner. All rights reserved. If you are reading this post at a site other than Bookfoolery and Babble or its RSS feed, you are reading a stolen feed. Email bookfoolery@gmail.com for written permission to reproduce text or photos.
Posted by Bookfool at 4:36 PM