Mini Reviews - The Making of a Rogue, French Milk and Charleston Mysteries

I don't feel like writing elaborate reviews of the following three books, so I'm going with mini reviews. You'll be amazed at my brevity, if you're a frequent visitor. 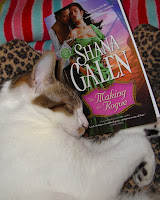 The Making of a Rogue by Shana Galen was originally slated for release in April of 2011. Instead, it won't hit the shelves till February of 2012 and the title will be different, although, "ROGUE will still be in there," according to the author. When I found out about the delayed release, I was disappointed because I loved the first two books in this series and I was eager to read my ARC. I mentioned that to Shana and she said, "Go ahead and read it, Nancy." After a couple months of thinking I should wait, the book hollered at me and I gave in, this weekend.
The former Marquis de Valere thought he was the only survivor of an aristocratic family whose estate was burned during the French Revolution. After escaping with a faithful servant, he became a sailor and is now a privateer working for Spain under the assumed name Captain Cutlass. While Cutlass is in port, a young woman named Raeven -- who has been raised on ships helmed by her father, an Admiral in the British Royal Navy -- shows up bent on revenge over the fiance who was killed in a battle with Cutlass' ship. When he finds out she's a woman, he is totally turned on. And, she tries to harbor ill will but doesn't succeed. The two have many adventures on land and sea as they continue to cross paths and their attraction grows. With love comes danger when Raeven must stay onboard Cutlass' ship to fight with his sworn enemy while her father pursues the rogue whom he assumes has taken his daughter's innocence.
There's a lot of sex in this particular installment, but I was in the mood for adventure and romance, so I enjoyed The Making of a Rogue immensely, in spite of my distaste for graphic sex. Shana Galen's next book, Lord and Lady Spy, is due to be released in September of 2011 and I can't wait. I love the way she blends action, adventure and romance. 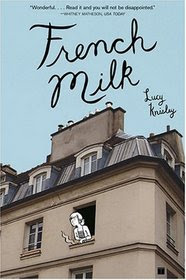 French Milk by Lucy Knisley is a graphic memoir, mostly illustrations with a smattering of photographs. Knisley spent over a month in Paris with her mother, when she was 22 years old, to celebrate her mother's 50th birthday, and the memoir is her account of her time in Paris in the form of a graphic novel.
Lucy headed to Paris sporting a new Nikon camera, her drawing materials and an unattractive attitude. Andi thought French Milk was "charming" and I read a brief review in which it was referred to as "honest". I found French Milk a little on the dull and annoying side, but I do believe the author manages to give her readers a decent sense of place. I would personally recommend Paris Was Ours over French Milk to those who are interested in reading about Paris, but French Milk is more of a quick-bite travelogue and Paris Was Ours is told from the perspective of a number of writers who have lived in Paris (sometimes in writings that may go over the head of a reader who knows little about France), so there's quite a difference.
The two things I loved about the book: the coat Lucy bought and the photographs speckled throughout. I like the illustrations, as well; the photographs are honestly not anything special. I just like the added dimension photographs give to a memoir. It's a personal preference. The thing I disliked most: references to her lover and some rather offensive illustrations of art (her favorite painting is, in my opinion, pretty disgusting), along with a bit of whining at the beginning of the book, although she does relax and enjoy herself more as time passes. 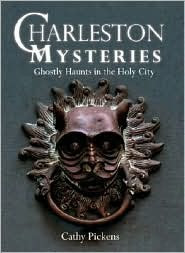 Charleston Mysteries: Ghostly Haunts in the Holy City by Cathy Pickens is part tour guide, part history. Divided into two sections, the first part is a walking tour of locations in the city that are said to be haunted and the stories behind the hauntings. Some are rather vague (as in, "This place may be haunted by Dude #1, but Dude #2 is another possibility"), some very specific. A small tour map marks the path and notes the locations of each haunted site.
The second book about Charleston, South Carolina, that I've finished since returning from Charleston, I found Charleston Mysteries very well-written and enlightening. Care and I did quite a bit of walking around the entire area in which the walking tour takes place and saw most of the places that are mentioned. In some cases, we didn't know the story behind a building or alley but were curious about certain signs or markings and I was thrilled to learn about the stories behind those mysterious markings. I'll definitely take this book with me on return trips.
The history portion of Charleston Mysteries is divided into topics such as "The King's Favor","Nature's Wrath: Storms Past and Present", "The Groaning Earth", and "Saving the Past". Charleston Mysteries is a very small book so nothing is treated with great depth but the ghost stories are satisfying and history chapters provide a nice overview of the city's fascinating past.
I've just finished reading Fire Season by Philip Connors, today, and I'm in the midst of moving books from one room to another, again, so I haven't settled on my next reads. I dropped two from my sidebar because I haven't touched them in over a week. I may continue to read both, but they'll stay out of the sidebar until I make significant progress.
What are you reading, today?
©2011 Nancy Horner. All rights reserved. If you are reading this post at a site other than Bookfoolery and Babble or its RSS feed, you are reading a stolen feed. Email bookfoolery@gmail.com for written permission to reproduce text or photos.
Posted by Bookfool at 12:43 PM