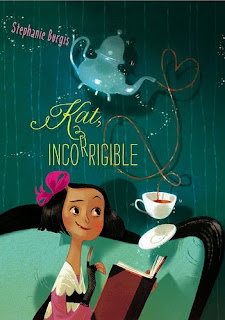 Kat, Incorrigible by Stephanie Burgis
Copyright 2011
Atheneum - Historical Paranormal Fiction
Middle Reader (Ages 9-12, that is)
295 pages
Stephanie Burgis' website
If my plan had worked, I would have woken up the next morning in a stagecoach heading toward London, with a whole new life waiting to unfold before me. I would have breakfasted on apples and cheese with the passengers around me, heard all their stories and been halfway adopted as an honorary nephew into all their families by the time we reached London.
Instead, I had to face my own family.
I walked into the breakfast room at eight o'clock and Stepmama's jaw fell wide open, exposing a mouthful of mashed toast.
"Katherine Ann Stephenson!" she uttered in a dreadful tone. "Whatever have you done to your hair?"
Book Description:
Kat's older sister Elissa is almost certainly going to be married off to some dreadful old geezer. The family is in dire straits thanks to big brother Charles, who has gambled the family into debt. But, Kat needs a better idea than running away. When she finds out her other sister, Angeline, has come up with a plan that involves casting spells from their deceased mother's magic books, Kat decides she needs to figure out some magic of her own. But, when she discovers she's inherited her mother's genuine magical gifts, chaos and danger ensue.
While Angeline casts a romance spell that doesn't work quite right and Elissa prepares to meet the man she will marry, Kat finds herself in all sorts of trouble. And, Elissa's potential fiance is showing a strangely sinister interest in Kat's magical powers. Will Kat be able to control her power in time to save the family?
What I loved about Kat, Incorrigible:
Kat, Incorrigible is a fascinating mix of magic, romance, adventure and slapstick fun in the Regency time period. I don't know that I had any idea what I was in for when I opened Kat, Incorrigible, but I absolutely loved everything about the book. The dialogue is witty and believable, the characters are a bit exaggerated (but in a good way), the story action-packed, sometimes hilarious, sometimes a little scary, always magical.
One of the things I adored about Kat, Incorrigible was the fact that the author successfully kept the secret of who was trustworthy and who was dangerous dangling for the majority of the book.
What I disliked about Kat, Incorrigible:
I think I would like there to be at least 2 more books about Kat available, right now. Other than that . . . nothing that I can recall. Kat, Incorrigible is, according to Amazon, the first in The Unladylike Adventures of Kat Stephenson, so someday I'll be satisfied. The author manages to keep a consistent tone and the characteristics of her nutty cast fall within the bounds of reason. Kat, Incorrigible is playful, hilarious, paranormal fun.
The bottom line:
Highly recommended. Magical, adventurous, entertaining and clean reading. If Kat, Incorrigible had been around when I was young, I might have read it around the 3rd-grade age range. And, then I would have reread it and reread it and reread it till it fell apart. I have always loved a book that makes me smile. My thanks to Simon & Schuster for the review copy, which I received via Shelf Awareness.
In other news:
We had quite a weekend. My plans to whip through Till I End My Song (poetry, edited by Harold Bloom) and share a poem fell flat when I came down with a nasty migraine on Friday. Mid-afternoon on Friday, I discovered Fiona had a raw, bleeding bald spot between her shoulder blades -- confirmation that she did have a nasty reaction to her shots. But, I couldn't drive because I couldn't see straight and husband arrived home too late to take us to the vet. By morning, the dime-sized patch had grown four-fold.
We rushed Fi to the vet, where her wound was pronounced "abscessed" and she received a cocktail shot of anti-histamine, antibiotic and anti-inflammatory . . . all of which are painful to inject. My sweet kitty just put a paw on my chest and said, "Meow?" The vet said, "She is a good cat." I know!!! We dosed her with painkillers and rubbed some hydrocortisone cream on her ouchie. Today was really the first day Fiona's been her normal, energetic self in a week. But, she obviously still has some recovering to do, poor baby. And, next time she gets shots, she is going to have one nervous slave.
I missed the royal wedding . . .
thanks to a migraine hangover. But, I watched some video clips and that was enough for me. Was Kate's dress perfect, or what? I think she earned the "princess" title, myself, just by dressing the part. But, I'm in agreement with the American comedian who said seeing the royal wedding was a reminder of how great it is that we live in a country where people don't wear weird hats to weddings (not his exact wording).
I did finish one book:
It wasn't much of an accomplishment, since the book is a quick and fairly silly read, but I managed to finish the mental_floss Genius Instruction Manual. John Green fans may be interested to know that he contributed to the book and is listed as one of the three authors.
Here, have a lizard: 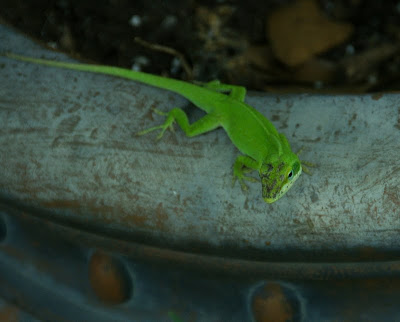 It's been a long time since I shared a lizard pic, so there you go. This next couple of weeks will be overwhelming, so I'm going to do my best to inundate you with reviews during the next couple of days. If I fail, it'll be a few weeks before I can catch up. But, I'll give it the old college try. I'll probably take off next week from the internet. We shall see. Happy Monday!
©2011 Nancy Horner. All rights reserved. If you are reading this post at a site other than Bookfoolery and Babble or its RSS feed, you are reading a stolen feed. Email bookfoolery@gmail.com for written permission to reproduce text or photos.
Posted by Bookfool at 1:54 PM