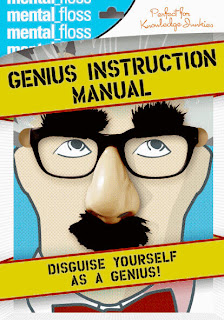 mental_floss Genius Instruction Manual
Ed. by Pearson, Hattikudur and Green
Copyright 2006
Collins - Nonfiction/Humor
198 pages
I have to be perfectly honest. I have very little to say about the mental_floss Genius Instruction Manual. If you've read anything by the mental_floss guys, you know they write with a fresh combination of wit and humor. Their Genius Instruction Manual is about par for the course. Note the subtitle, if that's what it is: "Disguise Yourself As a Genius!"
Well, that's a nice thought and all, but it's really just a book of facts and ideas that are hilarious and goofy and, hopefully, accurate. I can't vouch for the accuracy, although I can tell you I don't understand string theory any better than I did, before. And, I can also tell you I was entertained, I smiled a lot and occasionally nodded (I've known a few people I consider geniuses and some of them do fall into the "eccentric" category -- making chapters like, "How to Dress Like a Right-Brained Genius" feel almost too spot-on).
Do I think I could hold my own at another one of those conferences I've had to endure -- you know, the kind where you're surrounded by PhDs of the snob variety? Lord, no. I still think I'm better off just smiling, nodding and avoiding their questions (or, better yet, hiding in a hotel room).
The bottom line:
Entertaining, amusing, diverting nonfiction, heavy on the humor. Don't expect to converse with a genius without making a fool of yourself after reading this book if you haven't succeeded, already.
Isabel's take:
"I liked the chapter entitled, 'How to Go Crazy Like a Genius'. It proves I am already genius material. Also, it tastes almost as good as my left paw." 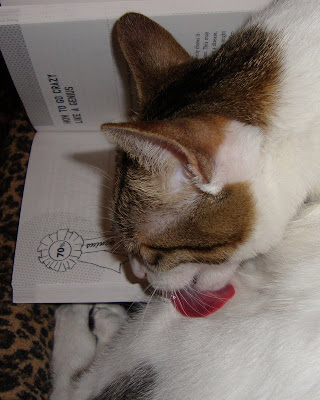 ©2011 Nancy Horner. All rights reserved. If you are reading this post at a site other than Bookfoolery and Babble or its RSS feed, you are reading a stolen feed. Email bookfoolery@gmail.com for written permission to reproduce text or photos.
Posted by Bookfool at 11:43 AM

Email ThisBlogThis!Share to TwitterShare to FacebookShare to Pinterest
Labels: cat photos, not quite a book review