The Lightkeeper's Ball by Colleen Coble 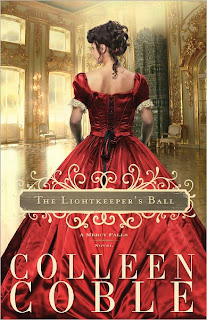 The Lightkeeper's Ball by Colleen Coble
Copyright 2011
Thomas Nelson - Historical with a touch of Romance/Christian/Mystery
292 pages
I'm going to go with the ultra-casual review method because this book is kind of twisty. It's 1910 (but the author didn't bother to share that bit of info; I figured it out by looking up the return of Halley's Comet, which is mentioned several times, and early plane flight). Olivia Bennett is 25, her father is dead, the family is running out of money. Big sis Eleanor was set to get hitched to her father's business partner's son (got that?), Harrison Bennett. But, when Eleanor tragically dies under suspicious circumstances, the elder Bennett says, "Deal off. Unless you'll let your other daughter marry my boy. Because, you know, we've got the money and you've got the respectability."
Oh, those crazy early 20th-century fusspots. Olivia is naturally miffed but she's sure Eleanor was murdered. So, utilizing a convenient "family title", she calls herself Lady Devonworth, packs up her bags and heads from New York to Mercy Falls, California, even though there's a murderer in California and plenty of fat, wealthy men to marry nearby.
What do diamond mines, a ball to earn funds for a lightkeeper and an airplane have to do with Olivia? And, is someone trying to dim her lights for good or are the culprits after Harrison? Is Harrison good or bad? Where is God in all this mess?
What I liked about The Lightkeeper's Ball:
Stuff happens. The Lightkeeper's Ball is a busy, plot-heavy book, so it's full of action. It's the third book in a series but stands alone well. That's always good. I also love the cover, even though it is so wrong it makes me feel like "The Sucker Who Fell for the Red-Dress Cover." I finished it but was tempted to give up, several times. At some point I finally decided I was going to finish it and enjoy it, tough luck if I couldn't buy into the story.
What I disliked about The Lightkeeper's Ball:
Unfortunately, I have to confess that I never, ever managed to get to the point of suspension of disbelief. Not even close. I was actually quite stunned to find out the author is a Rita award-winning author and this is her 18th title. This author could seriously use a reality check. The book reads like a list of plot points with a lot of fluffy fun in between. There were way too many dramatic incidents that I just flat could not buy into. I'm tempted to write about them but I'm sure Colleen Coble has plenty of fans and I don't want to spoil the book for them. It simply did not work for me.
Cover thoughts:
Grrrr. That is not a ballgown from 1910 and it makes me feel very, very pissy. I was totally confused until I looked up the earliest 20th-century return of Halley's Comet and then google-image searched dresses and ball gowns in 1910. The ball is a masquerade, but it's not right for that, either, since the heroine dresses as Juliet. Total cover fail.
You can read a free chapter of The Lightkeeper's Ball, here.
Let's end this on an upbeat note, with a pretty kitty pic. I just love kitty pics, don't you? 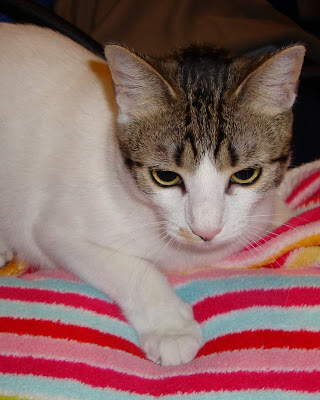 ©2011 Nancy Horner. All rights reserved. If you are reading this post at a site other than Bookfoolery and Babble or its RSS feed, you are reading a stolen feed. Email bookfoolery@gmail.com for written permission to reproduce text or photos.
Posted by Bookfool at 6:00 AM