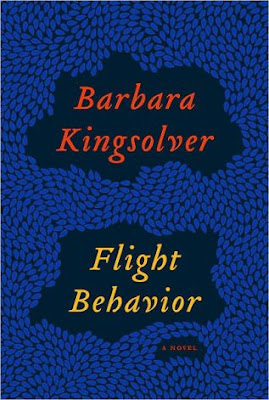 I am so embarrassed to admit that Flight Behavior is my first Barbara Kingsolver book after all the praise I've heard lavished upon Kingsolver by people I trust for so many years!  What was I thinking?

Flight Behavior is about a woman with a really bizarre name who is on the verge of having an affair.  Married young in the "shotgun" way, Dellarobia has two children and a devoted husband.  She loves them but she's not happily married because she's not fulfilled.  When she heads up into the mountains above her home to meet up with a man with whom she's had a flirtation going, she is shocked to find what appears to be a living valley of flame.

It's not flames that she sees but millions of monarch butterflies wintering in the wrong place.  What has caused the butterflies to migrate to the wrong place?  Is it an ominous sign or a miracle?  Will they survive winter in a place far north of their usual wintering spot?

I don't think this next comment is a spoiler at all, but if you're worried you may skip this bit because sometimes people disagree with what I consider spoilery:

Well, really quickly, it's a global warming thing.  And, since Kingsolver was a biologist before she became a writer, the science is sound (from what I've read).  Flight Behavior is fiction but similar things have been happening for years.  Yes, yes, I know there are plenty of people who don't believe in climate change.  She actually even explains why she believes that the idea of climate change-slash-global warming is something that people reject because it threatens deeply-held beliefs.

But, back to the story.  Barbara Kingsolver's writing is . . . it's just . . . I was blown away.  It is freaking beautiful.  Every single sentence is a work of art.  I'd say, "Why didn't you guys tell me?" but the truth is you did.  Thank goodness, I have at least two other Barbara Kingsolver books on my shelves because I did listen in a vague, detached way.  I just didn't bother to read them.

I will now throw the Kingsolver gushiness back at you.  People, you have got to read Flight Behavior.  Marvelous craftmanship, excellent storytelling, amazing characterization, and believable dialogue don't come together in such a mind-blowing manner very often.  Highly, highly recommended.

Flight Behavior can be a bit distressing if you are a lover of nature.  At times, I felt a little heartbroken at the thought of all those beautiful creatures dying.  I'm glad the story itself is fiction, if not the general concept. 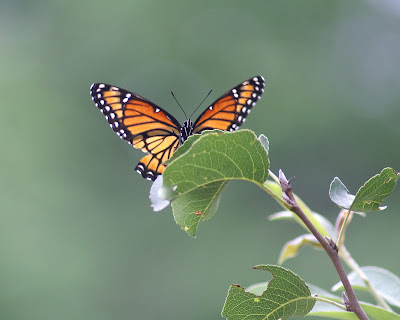 ©2012 Nancy Horner. All rights reserved. If you are reading this post at a site other than Bookfoolery and Babble or its RSS feed, you are reading a stolen feed. Email bookfoolery@gmail.com for written permission to reproduce text or photos.
Posted by Bookfool at 2:00 PM