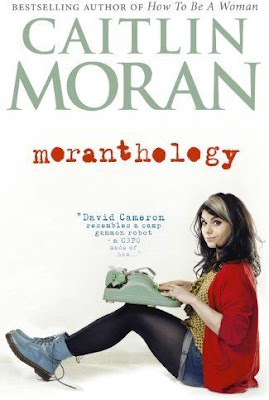 Words can be weapons, or love-spells, or just motorcars you can drive across county borders.


--p. 2 of Moranthology, Advanced Reader Copy (some changes may have been made to the final print version)


The barrista had looked at all the evidence, and concluded that I must have just failed to commit suicide by jumping in the Thames -- and that now I was having a coffee, while I waited for the tide to rise a little higher.

When I went to pay for the coffee, he gave me a free brownie.  I translated this brownie as a message, "Don't jump again."  It was 486 calories of humanity.

When I read about the variety of topics covered in Moranthology, British writer/humorist Caitlin Moran's collection of columns, I decided Moranthology was not a book I wanted to miss.  As it turned out, Caitlin Moran was one of the authors who helped yank me out of my recent reading slump.  I have reason to be grateful.

Besides gathering some of her columns, Moran has added explanatory notes so you get a nicely rounded view of where she came from and how she worked her way to being the caliber of columnist who gets to hang out with people like Keith Richards, Dan Stevens and Benedict Cumberbatch, visit the set of Dr. Who and spend an evening at a sex club with Lady Gaga (don't worry; it's fairly tame).

It would be hard to describe the sheer variety of topics Moran hits in Moranthology. Among them: writing, travel (or the lack of it), drugs, visiting the Dr. Who set, her thoughts on Downton Abbey (she's not a fan) and Dan Stevens (nice guy who is apparently quite the drinker), feminism, respect for the impoverished and gays, love, marriage, Paul McCartney and why Ghostbusters is better than Star Wars.

I really loved this book.  I laughed, I frowned, I nodded my head.  The cover has a quote from Marie Claire referring to Caitlin Moran as, "The U.K.'s answer to Tiny Fey, Chelsea Handler, and Lena Dunham all rolled into one."  Well . . . I don't know about that.  I won't touch anything by Chelsea Handler because the last thing I want to hear about is anyone's "horizontal life", but Caitlin Moran is funny, opinionated, kind of wild but happily married.  She's an interesting person and that's what makes the book fun.

Occasionally Moran can be raunchy and so can her interviewees, so if you prefer squeaky-clean essays Moranthology might not be the book for you. But, thankfully, she doesn't throw open the door to her sex life.  I had some particular favorite essays that I plan to reread, but in general I'm going to call this one highly recommended with a warning about references to drugs, sex and rock & roll.  You have to expect some of that when the interviewer is talking to someone who didn't stop using his drug of choice till he fell out of a tree and ended up with a metal plate in his skull, right?

Your cat fix of the day is "Isabel's Predicament": 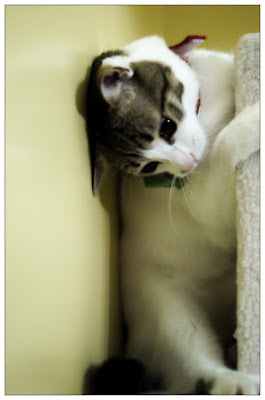 It was hilarious watching her wiggle her way out of that position, between the wall and the cubby part of the kitty tree.

Still playing catch-up on reviews, so we may roll right past Malarkey and Twaddle, this week.  We'll see.


©2012 Nancy Horner. All rights reserved. If you are reading this post at a site other than Bookfoolery and Babble or its RSS feed, you are reading a stolen feed. Email bookfoolery@gmail.com for written permission to reproduce text or photos.
Posted by Bookfool at 4:12 PM