These three mini reviews are the last book reviews I'll be doing for the year.  I may post once or twice more and then I'm going on holiday for a few weeks.  I'm already a little late walking away for Christmas season, as I usually do. 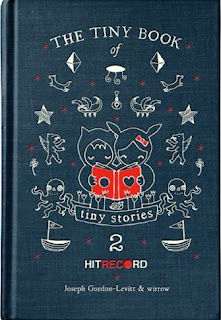 I was extremely excited when I heard the second Tiny Book of Tiny Stories had been released, since the first version was so fun I read it repeatedly and foisted my favorite pages on the spouse.

However, on the second reading I started to discover my favorites and . . . you've got it . . . foisted them on the spouse.  I only share things I really love with Huzzybuns -- stories or illustrations that make me laugh, smile, or ponder.  And, there were plenty of stories and illustrations that made me smile, although they seemed fewer and farther between.

The difference between Vol. 1 and Vol. 2 of The Tiny Book of Tiny Stories?  Well, there are a couple differences.  In the first release, there was a great deal of work by Joseph Gordon-Levitt, aka "Regular Joe", and he's an extremely clever guy with a terrific sense of humor.  This time, he edited with "wirrow" but didn't contribute, otherwise.  I think wirrow simply has a different way of looking at things, a little more pensive and even sorrowful.  But, The Tiny Book of Tiny Stories 2 is about twice as thick as The Tiny Book of Tiny Stories (the original).  So . . . there's plenty for everyone and I think it's another stocking-worthy book.  I love the mix of art and thought-provoking stories in both books and can't wait for the third and final release.  In fact, I hope they go beyond three publications. Highly recommended (although at first I was hesitant). 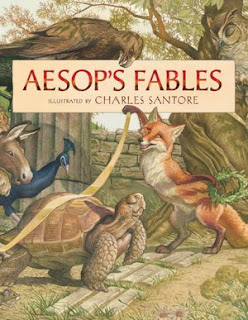 There are no humans in Santore's version of Aesop's Fables. Instead, Santore chose a selection of stories, rewrote them in his own words and illustrated with only animals as subjects.

I've always loved Aesop's Fables and have particular favorites.  My personal favorites are still the same, although one is not in Charles Santore's Aesop's Fables and Santore may have either introduced me to a few fables I missed or merely reminded me of their existence.  At any rate, there's not much you can do to screw up Aesop, apart from poorly rewriting the stories and I think he did a decent job, although a "moral" or two was worded differently from the way I learned them.

It's the illustrations that make Charles Santore's books shine and Aesop's Fables is no exception.  Highly recommended, especially for mothers or children who love to stare at the details of gorgeous illustrations. 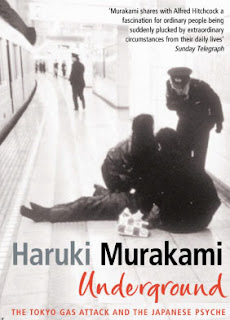 Underground by Haruki Murakami is the one book I wouldn't advise you to rush out and buy for last-minute Christmas gifting, although Underground is a fascinating read.  It's just that reading about people gasping for breath and going blind is not particularly cheerful reading material.

Underground is Murakami's attempt to understand the Tokyo sarin attack that took place in 1995 by interviewing both people who were poisoned or close to a victim and some of the Aum cult members, none of whom were directly involved in the poisoning.  He also spends a little time evaluating what went wrong and how to avoid such disastrous results if they were to recur.

I knew very little about the sarin attack -- or, coordinated attacks, I should say.  The puncturing of bags full of sarin took place in a number of different trains.  Death and injury in the subway trains and various stations were due to a combination of ignorance (no knowledge of sarin's effects, in spite of a previous attack), very poor communication, the lack of preparation for large-scale disaster and the Japanese tendency to stick to routine in spite of some pretty dramatic signs of danger or illness.

Underground started out a little slowly for me.  I'm not sure what I expected, but in many cases the personal accounts were rather bland.  Relatively few of the victims were even willing to speak to Murakami because they didn't want to think about their experience, much less discuss it.  However, there are a few accounts that are incredibly moving, particular those of the brother of a woman who was still barely able to move or communicate when the book went to press (but remained stunningly cheerful), the young widow of a man who died and the young man's parents.  The section with interviews of people who belonged to Aum is fascinating for the look into the personalities and why people join such a group, as much as the machinations of cult life and the attack.

I thought it was particularly interesting to hear the thoughts of one woman who had lived in the U.S. for a year  She said if the same thing happened in America, people would have reacted with urgency and noise, speaking up about feeling ill and insisting on immediate action.  I can't argue with that.  I spent a lot of time imagining what the response would be like elsewhere before I got to her comment.

Highly recommended - An interesting view inside both the lives of people who were affected by the sarin attack and those who were involved in Aum (which I think the government of Japan eventually gave religious status and which apparently still exists under a new name and leader, although it has all the hallmarks of a cult).

©2012 Nancy Horner. All rights reserved. If you are reading this post at a site other than Bookfoolery and Babble or its RSS feed, you are reading a stolen feed. Email bookfoolery@gmail.com for written permission to reproduce text or photos.
Posted by Bookfool at 5:45 PM