The Story Hour by Thrity Umrigar 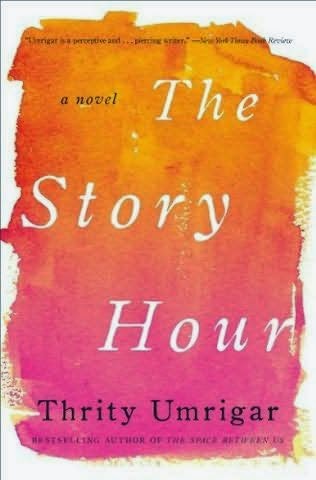 The Story Hour is about an unusual relationship between a psychologist named Maggie and her patient, Lakshmi. A young woman in a seemingly abusive and confining relationship, Indian immigrant Lakshmi attempts suicide in a moment of despair. Maggie is known for her ability to work with difficult patients and for her unorthodox methods. Only she can get Lakshmi to speak. After Lakshmi's release from the hospital, Maggie has the young woman follow up with appointments at her home office, free of charge. Lakshmi clearly needs a friend more than she needs therapy but Maggie believes she can maintain emotional distance.

In spite of Maggie's efforts to remain cool and distant, Lakshmi begins to think of Maggie as her friend while Maggie encourages Lakshmi's independence and doesn't correct Lakshmi for fear of setting her progress back. Meanwhile, as Lakshmi's relationship with her husband gradually improves, Maggie is in the midst of an affair, even though she knows better. She is aware that the affair would devastate her husband if he found out and that she couldn't have chosen a better man to marry. Yet she can't seem to stop seeing the other man. When Lakshmi reveals a dark secret that changes everything Maggie understands about her and Maggie pulls away from Lakshmi, disaster strikes for Maggie.

I had no idea how difficult it would be to describe The Story Hour till I sat down to write. There are some complexities to the relationships, all around, but I don't want to give away too much. Suffice it to say, Lakshmi's life is not quite what it seems and Maggie's childhood figures into her inability to stop seeing the "other man".

The style of storytelling is also quite interesting. Umrigar has chosen to portray Maggie and Lakshmi in alternating chapters and it's easy to tell when you're in Lakshmi's point of view because her English is astoundingly bad. You get the impression that Lakshmi is uneducated, perhaps a bit simple, and that she was forced into marriage with a terrible man, but as Lakshmi reveals her past you find out she's actually quite clever. So, how and why did she end up in such a terrible marriage?

Maggie is equally perplexing. Although she's involved in an affair, her husband could not really be more perfect. He's supportive, loving, intelligent, successful. Why would a woman in such a happy marriage have an affair? Well, you'll have to read the book to understand. Maggie is much more difficult to relate to, although her story is more straightforward. Most psychologists (at least, the ones I know) are in the business because of their own challenges and their desire to help people in similar circumstances. The same is true of Maggie, but I think you could say the cracks in her past have been covered, not mended, and therein lies the secret to her weakness.

I found myself engrossed in The Story Hour from the beginning.  Lakshmi's poor English makes for strange reading, although she's easy enough to comprehend. My only complaint about the book would have to be the chapters that are narrated by a younger Lakshmi. Because the book is written in English, even when Lakshmi is young she's narrating in the English of her adulthood -- and yet, you know by the time you hear from young Lakshmi that she is, in fact, quite intelligent. So, there's a bit of a disconnect. Why is young Lakshmi narrating in broken English? Shouldn't it be an English translation of an intelligent young Indian's perspective? That's really a writing technicality. I think it I were the author, I would have ground to a halt at that point. The fact that she made a choice to keep Lakshmi's perspective clear by not altering her mode of speech (maybe to maintain flow) probably shows the maturity of Umrigar's writing. She writes with confidence and authority, even if you feel something is a tiny bit amiss.

Recommended - I loved this story, its nuances and the changes in the characters, for better or worse. Although Lakshmi's story eventually becomes clear before it's fully revealed, it's not predictable. I thought Umrigar did a bang-up job of slowly revealing both characters' histories and then turning everything on its head. While I didn't find the ending particularly satisfying, I enjoyed The Story Hour enough to feel like I could draw my own conclusions and close the book without feeling let down, so I definitely recommend it.