This is the Water by Yannick Murphy (DNF) 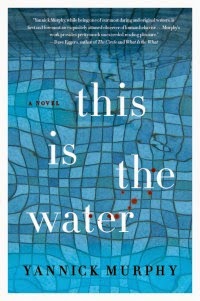 This is the water, lapping the edge of the pool, coming up in small waves as children race through it.  This is the swim mom named Dinah wearing the team shirt with a whale logo on it, yelling at her daughter Jessie to swim faster. This is Jessie who cannot hear Dinah because Jessie is in the water. Jessie is singing a song to herself. She is singing, "This old man, he played one. He played knick knack on his thumb." Dinah is red in the face, standing in the stands. Dinah moves her hand in the air as if to help hurry her daughter along. Behind the starting blocks the water comes up over the edge of the pool and splashes the parents who are timing on deck.

~p. 1 of This is the Water (first paragraph)

This is the Water was a DNF (Did Not Finish) read, unfortunately. The Call by Yannick Murphy was actually one of my absolute favorite books of the year in 2011, so I had high hopes.

This is the Water is a book with characters involved in a private swim team. One of the swimmers is murdered, one of the parents thinks her husband is having an affair, another finds herself attracted to someone else's husband. This is the Water interested me primarily because I loved The Call so much, but I also was a swim mom for many years and in spite of some painful politics that made a mess of things for a time, I still miss that world. I thought it would be fun to immerse myself in the reading of a book that described an activity I really loved being involved in. I didn't particularly care about the murder aspect, just the world of swimming.

Unfortunately, it was the author's choice to write This is the Water in 2nd person present that drove me away. I made it 65 pages. Had the book been told in 3rd person or even 1st person, either past or present, I think it would have worked fine for me.  I was interested in the characters and what was going to happen to them. The fact of the matter is that the storytelling was simply too clunky and exhausting. Every time I put the book down, I found myself sighing with relief. The final time I set it down, I realized that I could happily walk away from the story without ever picking it up again. It was simply too draining. So, I stopped. I usually go by the 50-page rule but, again, I did think the characters and the idea were good ones. It was just not a manner of storytelling that I could bear, although I can appreciate the idea -- the experimentation and creativity of trying a new style.

If you like the writing in that first paragraph (from the published print version) and don't find the repetition as tiring as I did, I definitely recommend that you go for it. I skimmed the reviews at Goodreads and found that I'm in the minority; This is the Water is getting pretty high ratings. And, although this particular book did not work for me, I will definitely read Yannick Murphy's work, again.

©2014 Nancy Horner. All rights reserved. If you are reading this post at a site other than Bookfoolery  or its RSS feed, you are reading a stolen feed. Email bookfoolery@gmail.com for written permission to reproduce text or photos.
Posted by Bookfool at 10:15 PM