The Transcriptionist by Amy Rowland 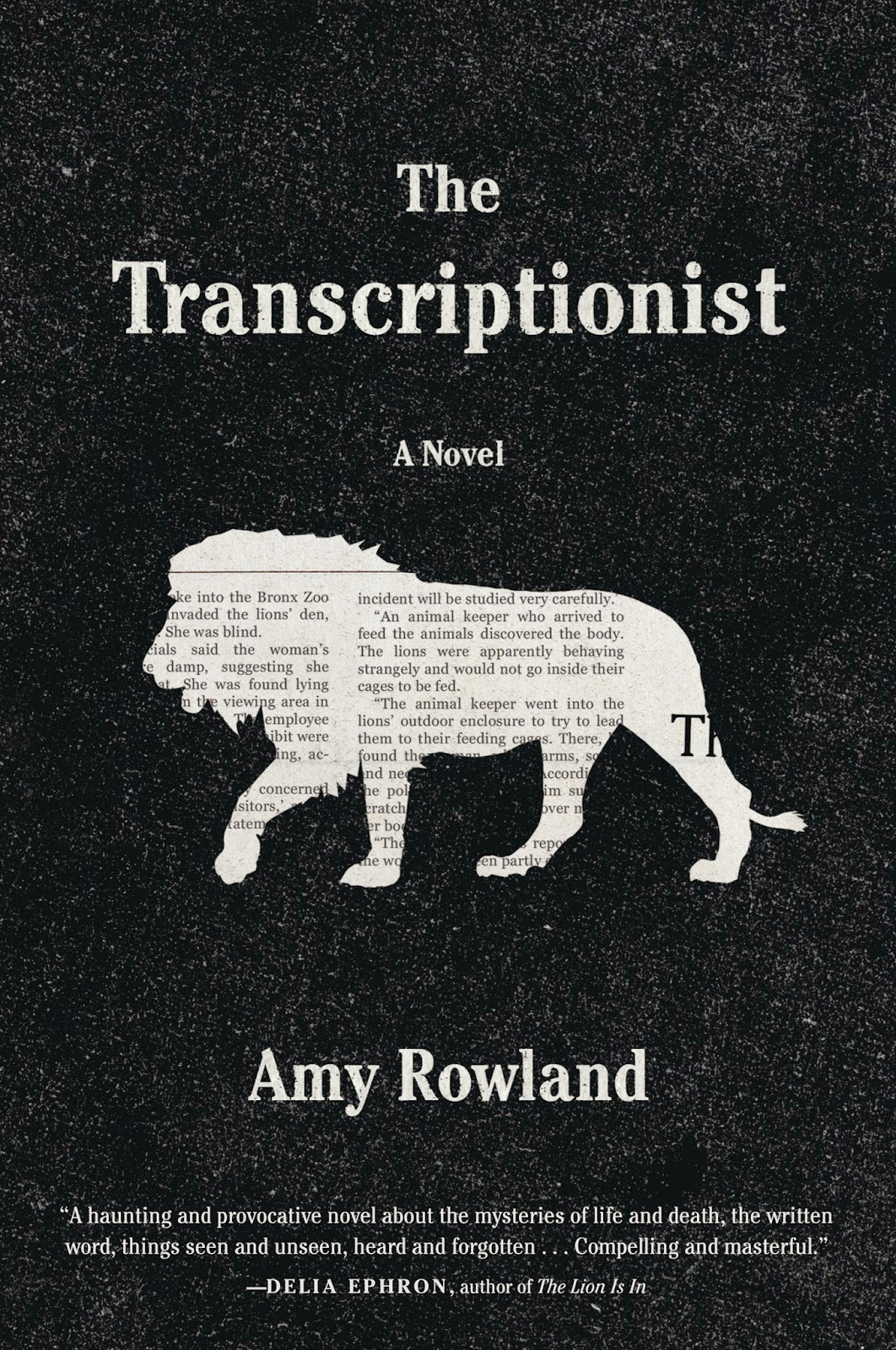 I'm going to have to go ultra-casual on this one because, much as I loved The Transcriptionist and found myself wanting to immediately reread it while I was still reading, I've forgotten a few things. So . . . the Extremely Casual Thing Known as a Self-Interview is today's method of reviewing.  I will be interviewed by Patience and Fortitude, the New York Public Library lions. They're relevant.

Fortitude: Just so you know, we can speak Human, as well. However, we usually only do so at night, when the books come to life.

Patience:  Right. Tell us about The Transcriptionist.

BF:  OK. Lena, the protagonist, is a transcriptionist -- a person who transcribes tapes in the old-fashioned sense (listening to cassettes or VHS tapes and typing transcripts of interviews or dictated material) at the Record, a fictional New York City newspaper. When Lena sees the obituary of a blind woman who was killed by lions at the zoo in an apparent suicide, she becomes obsessed with how and why she died because she recognizes the woman's face in the photograph accompanying the obit. Just days before, she sat by the woman and spoke to her on a bus.

Fortitude: I could eat you.

BF:  Thanks for that info.

Patience:  Ignore Fortitude. What did you particularly like about The Transcriptionist?

BF: The Transcriptionist is a quirky book. Lena is the last of a dying breed, so to speak. She's the only transcriptionist left at The Record and she very seldom has the chance to interact with people. Because she's an avid reader and alone much of the time, she has a problem with talking to the pigeons outside her window and occasionally getting caught, thinking and speaking in quotes, sometimes even letting her daydreaming enter her transcription.  I also love the way the author brings New York City to life. I did a lot of googling of various locations described in the book; I love it when an author makes the setting so vivid you want to hop a plane to see the locations described in real life.  In fact, I do think I need to reread the book and take notes for future visits to New York City.

Fortitude:  Were there parts that made you want to growl or swipe?

BF: Nothing really annoyed me in a big way, apart from the fact that it took forever to figure out when exactly the story took place. Eventually, I figured out the year was 2003 . . . and then I almost immediately forgot how I came to that conclusion. There's a character who doesn't realize he's calling Lena by the wrong name and when she eventually corrects him, his reaction is kind of squirrely but the characterization is great. There are quirky people and distracted people and people with huge egos. There's a bit of a real-life feel and yet at times the book feels almost like it leans toward fable, with a character living in the building (I won't give away where he's hiding) and the strange out-of-place feel of the transcription room.

BF:  Highly recommended. While sometimes the story is a bit uncomfortable, I really loved The Transcriptionist and highly recommend it, especially to readers who like a slightly off-beat but intelligent story. Also, fans of a New York setting and those who currently live in or have lived in New York City will probably love The Transcriptionist for the use of setting.

Fortitude:  Now I can eat you?

©2014 Nancy Horner. All rights reserved. If you are reading this post at a site other than Bookfoolery  or its RSS feed, you are reading a stolen feed. Email bookfoolery@gmail.com for written permission to reproduce text or photos.
Posted by Bookfool at 3:06 PM