Just one big stack to finish up, although I know I have a few other books scattered about - some in my pile of finished books for August. I'll try to gather those on Monday. 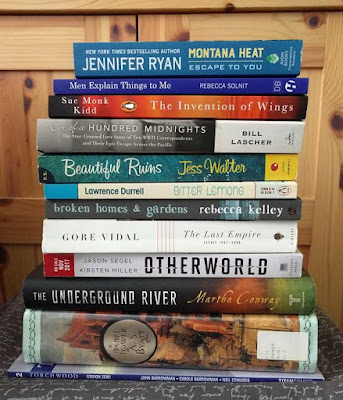 Not going to go completely in order because I wanted to stack the books by size and then, since I have completely hit the proverbial wall today, I didn't even manage to pile them neatly. Oh, well. I'll still start at the top.

Montana Heat: Escape to You by Jennifer Ryan - from Avon Books but I think this may be unsolicited. I sure don't recall requesting a romance. I like the occasional romance, though, so I'll read it when I'm in the right mood.
Men Explain Things to Me by Rebecca Solnit - purchased for my feminist reading project
The Invention of Wings by Sue Monk Kidd - purchased for F2F discussion
Eve of a Hundred Midnights - pre-ordered and I had no idea it was coming till Amazon informed me
Beautiful Ruins by Jess Walter,
Bitter Lemons by Lawrence Durrell,
Broken Homes & Gardens by Rebecca Kelley,
The Last Empire by Gore Vidal, and (way down there near the bottom)
Babel Tower by A. S. Byatt - all from my delightful friend Sandie
Otherworld by Jason Segel and Kirsten Miller - from Delacorte Press for review (maybe via SA?) - Youngest son is really interested in this one but he's got a tough semester ahead so he probably won't get to it till he has a holiday. If possible, I'll share his thoughts, though, when he gets to it.
The Underground River by Martha Conway - from Touchstone for review
Torchwood: Station Zero by John & Carole Barrowman and Neil Edwards - purchased. And, I also have the first of this series, which I may have neglected to photograph but I just don't remember. Both were ordered so far back (about 2 years ago, I'd guess, not long after I watched the entire Torchwood series) that their arrival was also completely unexpected.

That's all for today. Tired Bookfool is going to crash, maybe read a little, maybe stagger out to the kitchen and unload the dishwasher.

©2017 Nancy Horner. All rights reserved. If you are reading this post at a site other than Bookfoolery or its RSS feed, you are reading a stolen feed. Email bookfoolery@gmail.com for written permission to reproduce text or photos.
Posted by Bookfool at 4:35 PM