Noor's Story: My Life in District Six by Noor Ebrahim 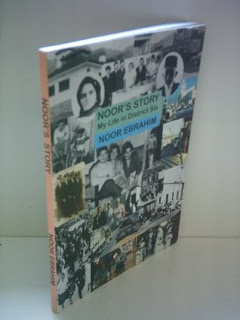 Noor's Story: My Life in District Six by Noor Ebrahim is a book I bought in Cape Town, South Africa when we went on a tour of District Six, Langa township, and Robben Island (the island on which Nelson Mandela was imprisoned for 18 years). The District Six Museum is pretty much all that's left of the once-thriving community in which Ebrahim once lived.

The name "District Six" has to do with the fact that Cape Town was once subdivided into districts and it just happened to be the sixth district. There's nothing particularly special about the name. But, the district was unique in that it was a melting pot, its residents diverse but living vibrant lives in harmony. In the 1960s, the residents of District Six were informed that their district had been designated an area for whites only and that they'd have to move. However, nothing happened for nearly a decade. Life went on as usual until the government finally got around to forcing people out in the 1970s. And, then they literally bulldozed almost every building.

In Noor's Story, the author talks about his childhood and young adulthood in District Six. Although his family was impoverished, they lived a happy life and always knew that if they were short on money, they could ask the neighbors for a little help and count on them to provide a little bit of bread or vegetables. They would never starve. The district was self-reliant, so while some of the residents commuted to other parts of Cape Town to work, they had everything they needed in District Six - food, schools, churches and mosques, a theater, etc. Noor had a variety of interests including athletics and choir. He talks about various holidays, religious and otherwise, and the parades that everyone looked forward to. And, he tells about how and why he gave up his schooling and sought employment to help finance his siblings' education.

The sad part, of course, is the destruction of the district and the way the community was divided as everyone was forced to move. For some, life was never even remotely the same. Once that community was gone, many of its traditions and connections disappeared, as well. Those who lived in District Six will tell you they believe the district was destroyed because it served the government's purpose to have people of varying backgrounds divided. Apartheid still existed and whites could only stay in power if they encouraged division. Trevor Noah made similar comments about the way blacks were divided into differing factions during Apartheid. It's fascinating and definitely a lesson worth studying.

Highly recommended - If you're interested in what life was like in this unique community, I definitely recommend it. I found myself looking up a lot of words that were unfamiliar (or looking them up again if I'd read them, before - "koeksisters", for example, are a confectionary that looks much like our donuts and I read about them in another book but promptly forgot the word). While sometimes I couldn't find a definition, I found reading about the community so enjoyable that I just shrugged it off and continued when that happened. No biggie. The bottom line was that District Six was a place where people of different colors, religions, and backgrounds lived in joyful harmony. I loved immersing myself in Noor's world.

©2017 Nancy Horner. All rights reserved. If you are reading this post at a site other than Bookfoolery or its RSS feed, you are reading a stolen feed. Email bookfoolery@gmail.com for written permission to reproduce text or photos.
Posted by Bookfool at 6:32 AM