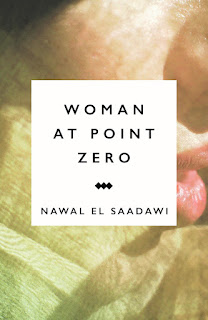 I purchased Woman at Point Zero to read as part of my personal Feminist Reading Challenge after reading an award-winning author's description of it as one of her all-time favorite books. A book described as "fictionalized nonfiction", it tells the story of a woman who grew up in Egypt and was calmly awaiting her death when the author met her. It's a rough read and hard to even think about, but when I wrote about it at Goodreads, I felt like I needed to spill. What happened to the subject of this book, Firdaus, happened because of the culture in which she lived. And, she was tough but it was a horrible life.

My review may contain spoilers. Please don't read it if you're concerned about spoilers.

Firdaus grew up poor, with a father who insisted on being fed every night, even if that meant the rest of the family starved, and an uncle who would stick his hand up her skirt while he sat beside her, reading. After her parents died, Firdaus moved in with her abusive uncle and eventually was sent away to boarding school, where she proudly received her secondary school certificate (the equivalent of a high school diploma). When she returned to her uncle's home, she overheard him saying he didn't want to spend the money it would cost to send her to university.

Without a university education and with nobody to recommend her, Firdaus had few options. She tried to make it on her own and was repeatedly raped and abused. She learned to dissociate when she was forced into prostitution. She tried working a regular job and found herself constantly sexually harassed and even poorer than she had been as a prostitute. Eventually, she killed in self-defense. By that time, she was well aware that the odds were stacked against her and always would be. She was ready to die and rejected offers to help her escape the death penalty.

I found Firdaus's story shocking and powerful. Have things changed in Egypt since the book was published in 1976? Are women still routinely abused and held back? I don't know. It was not that long ago that American reporter Lara Logan was shoved to the ground and sexually assaulted in Egypt, so I'm guessing the answer is no. Woman at Point Zero is a stunning story of how a lack of education and resources combined with dangerous misogyny can create a society that perpetuates its own horrors. A stirring reminder of why women in the Western world must keep fighting to maintain and expand our rights to equality and the ability to choose what happens to our bodies.

Highly recommended - I gave Woman at Point Zero 5 stars but on reflection I think I'd lower it to 4 stars, if only because I recall the dreamlike quality of the writing; it's beautiful but the story is brutal. That is a style issue, though, and I liked it as I was reading it. The subject matter is powerful as it shows just how dangerous it is to let men dictate how women are treated. When women don't have a say, they're less likely to be educated, more likely to be abused, less likely to be able to find a way to support themselves and live independent lives. Firdaus was simply doomed to a horrible life, no matter what she did to try to improve it. Difficult as Woman at Point Zero is to read, it's a thought-provoking book that gives insight into what a male-dominated society in which abuse of women is commonplace looks like. If you've experienced sexual assault and are easily triggered, I recommend avoiding Woman at Point Zero. I have a feeling it could send even the hardiest survivor into a depressive tailspin.

©2017 Nancy Horner. All rights reserved. If you are reading this post at a site other than Bookfoolery or its RSS feed, you are reading a stolen feed. Email bookfoolery@gmail.com for written permission to reproduce text or photos.
Posted by Bookfool at 7:00 AM