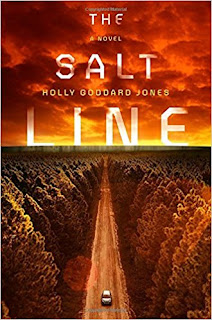 The Salt Line begins with a group of people who are preparing to go on an expedtion. The world is dystopian, a near-future world in which a deadly tick has caused the United States to be subdivided into zones. The characters we're following are mostly wealthy people from the Atlantic Zone who are going to an Outer Zone in the region that used to be known as the Smoky Mountains. In this future world, people are presumably crammed into cities in the regions that are safe from tick infestations and have little to no exposure to nature. Some zones only experience periodic outbreaks but that's enough to make their inhabitants poorer, their zone less desirable and populous.

We get to know the characters while they're doing their training. Edie is a former bartender who is partnered with the man she's been dating, an online pop star named Jesse. Wes is a fabulously wealthy tech start-up genius who came up with what I presume is a banking system and his partner (on the expedition, each has to have a partner to "stamp" them in the event of a tick bite) Marta is the wife of a mob boss with political aspirations. There's a brother and sister, a married couple who are both lawyers, and some others who have lesser roles. Tia and Andy are their guides.

After the training, the participants don suits that are designed to protect them from ticks and hike to their first campsite. At this point, I was still convinced I was reading a survival story. But, not long after, there's a surprising plot twist that changes the entire character of the novel and the question is no longer, "Will they survive the dangerous Outer Zone or will some die of Shreve's, the deadly illness carried by the ticks?" but "Will anyone survive?" There is some violence and plenty of deaths but fortunately The Salt Line is not too gory, although there is at least one totally gross infestation in which the ticks reproduce and then explode out of one of the adventureres' skin. Ewww.

I found The Salt Line riveting most of the time, but there were moments of exposition that I found tiresome. I'm not sure I always needed that extra bit of character development that came via flashbacks and storytelling by characters. But, that was one of only two complaints I had. The other was the fact that I did have a little difficulty buying into a world in which an entire country had been subdivided on the basis of the presence of a disease-brearing tick. Granted, the author did explain that there was no foolproof defense - no preventive cream or suit had a 100% success rate and the ticks burrowed so quickly that even using the so-called stamp that pulled them out and burned the eggs was no good if you didn't act fast. Would that be enough to drive people into the most crowded regions to survive? I don't know. It felt like there needed to be some other driving factor to explain the mass migration.

Regardless, I enjoyed the reading, the uniqueness of the world building and storyline, the character development (bearing in mind that there were a lot of characters and not all were in need of the same depth of treatment), and the surprising plot twists. There were a couple major plot points that I anticipated but I didn't find the book generally predictable so they were not bothersome. I did sense the author's presence in the "Who will live and who will die?" aspect. But, she did a good job of developing characters with flaws, some more likable than others, and I liked where she took the characters who were the kindest.

Recommended - Surprising in many ways, The Salt Line is a very good read with well-developed characters, unique world-building, and an unusual storyline that shifts dramatically, partway in. I will be looking for more by this author.


©2017 Nancy Horner. All rights reserved. If you are reading this post at a site other than Bookfoolery or its RSS feed, you are reading a stolen feed. Email bookfoolery@gmail.com for written permission to reproduce text or photos.
Posted by Bookfool at 7:05 AM