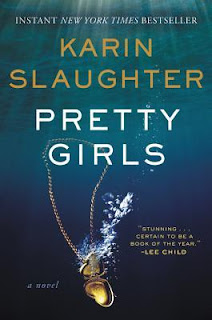 I'm just going to admit how I felt about Pretty Girls up front so you can decide if you want to read on. When I finished the book, I was taking my blogging break but still writing quick reviews at Goodreads. I opted not to give it a rating at all because I disliked it so much. However, if I were to rate the book only on the quality of writing, I'd give it a 4/5. Karin Slaughter is clearly a pro. Her characters were nicely fleshed out and some of the women were very clever, with terrific senses of humor. I found myself wishing the author would use her skill to write something less gruesome.

However, the storyline is about men (not just one) who torture women to death, a woman who finds out her husband was evil, and a family in which loss and not knowing what happened to a missing daughter/sister has torn them asunder. Had it not gone into such graphic detail about the torture and murder of kidnapped women and instead been the story of a family working together to solve a decades-old crime without the gore, I might have been okay with it. I was quite impressed with the author's skill in storytelling and characterization - and I loved the dialogue between them. Most of the family had a dry wit, so when some of the characters were interacting, the dialogue was often quite fun.

Having said all that, I just can't handle this kind of book and a part of me desired to rate it 1/5 just for being so damned revolting. I considered giving up around page 225 or so. The only reasons I continued: I wanted to see it through so I could know that the worst of the evil men would never hurt anyone again (it was predictable that something would happen to him in the end) and read the resolution in which the family finds its answers. And, yes, those two aspects were satisfying.

Not recommended unless you have a really strong stomach - If you can handle horrifically graphic detail, great. If not, avoid this book. The torture was just too much for me. I will not read Karin Slaughter, again.


©2017 Nancy Horner. All rights reserved. If you are reading this post at a site other than Bookfoolery or its RSS feed, you are reading a stolen feed. Email bookfoolery@gmail.com for written permission to reproduce text or photos.
Posted by Bookfool at 8:01 PM