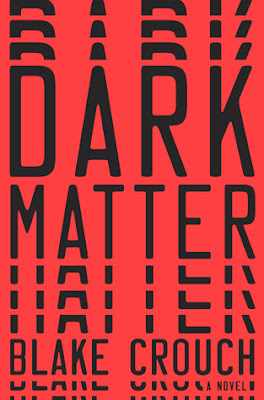 There's an energy to these autumn nights that touches something primal inside of me. Something from long ago. From my childhood in western Iowa. I think of high school football games and the stadium lights blazing down on the players. I smell ripening apples, and the sour reek of beer from keg parties in the cornfields. I feel the wind in my face as I ride in the bed of an old pickup truck down a country road at night, dust swirling red in the taillights and the entire span of my life yawning out ahead of me.


This is the only thing I wrote in my Goodreads review of Dark Matter by Blake Crouch: "Could. Not. Put. Down."

And, really, that's probably all you need to know, but nah. I want to talk about this book. Dark Matter is about a scientist whose life has not turned out quite as he originally intended. Jason's never finished the project that he planned on making his life's work, instead choosing to marry, have a family, and teach. Although his life isn't perfect, he's happy. Then, one night, everything changes.

Knocked unconscious by a masked man and taken to a place that appears abandoned, Jason awakens in a hospital and finds that he hasn't returned to the same Chicago he left. Instead, he's ended up in a world in which he's unmarried, his son doesn't exist, and he's a successful scientist rather than a college physics professor. Pursued by people who claim to be his friends, Jason must figure out how his own invention -- the one he didn't get around to finishing or even figuring out -- functions. Only then will he have a shot at returning to the home and family he loves. Can Jason survive long enough to find his way home? Or will someone stop him before he runs out of chances?

Highly recommended - The science aspect of Dark Matter can be a little hard to follow, at times, and the story is definitely mind-bending as the Justin Cronin quote says on the cover, but I didn't have any difficulty following the logic of Crouch's world building. And, Dark Matter is by far the most gripping novel I've read in years. Jason and his family are likeable so I rooted for him to find his way home. I also thought the book was well written. Fast-paced books are often not crafted with as much care as one would hope, so I appreciated the competency and care of the author's writing.

The cover shown above is, I assume, the American version (or one of them). My copy was purchased from Book Depository and looks a bit different: 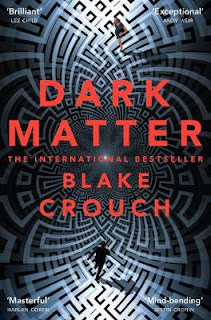 Dark Matter is my second read by Blake Crouch. I also read Pines and enjoyed it enough that I downloaded the following two books in the Wayward Pines series to my Kindle app (haven't read them, yet). Dark Matter is a stand-alone novel. I enjoyed it so much that I'm going to hang onto my copy to use as a slump breaker, in the future.

©2017 Nancy Horner. All rights reserved. If you are reading this post at a site other than Bookfoolery or its RSS feed, you are reading a stolen feed. Email bookfoolery@gmail.com for written permission to reproduce text or photos.
Posted by Bookfool at 1:57 PM