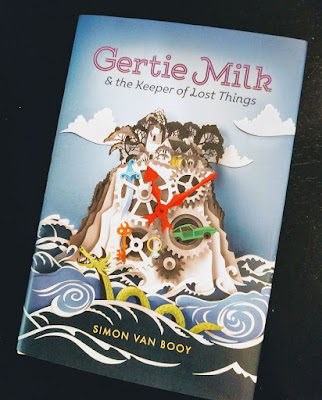 "So we're in London," Gertie said, looking around at the men in dark suits and women in tall feathery hats. "Have you been here? Where is it?"

"It's in far western Europe, capital city of an island that's known for bad weather, horrible food, and people who are exceedingly polite--when they're not trying to invade your country."


***This review may contain some spoilers. Please skip down to the rating if you're concerned!!***

I've read several middle readers, lately, and I have to tell you I'm impressed with the quality of the reading material. Gertie Milk and the Keeper of Lost Things by Simon Van Booy is the most adventurous of the books I've read, lately, and if you've hung around my blog for any length of time, you know I love a good adventure. It's also a little bonkers - such an imaginative world!

Gertie Milk doesn't know where she is or where she came from. She doesn't even know her own name until she sees it embroidered on the gown she's wearing. All she knows is that she's on a beach and needs to get to high ground before the ocean swallows her. It's a challenge climbing to the top of the island she's on, but once she gets there she is taken in by a man named Kolt, who lives in a very strange house that is both filled with and surrounded by things that have been lost. He is a Keeper of Lost Things and the Keeper's job is to care for these lost items and return them when needed, as directed by a large, dusty, magical book. He is the last of the Keepers but he's not sure why, although the Keepers have an enemy called the Losers.

When Gertie discovers a key in her pocket, Kolt tells her she is a Keeper, as well. To return items, she and Kolt will travel through time and face all sorts of challenges, meet a new friend called Robot Rabbit Boy, and glimpse history. But, the Losers are out to stop the Keepers from doing their job, forever. And, Gertie will be torn when she finds out the truth about her past.

Highly recommended - What a crazy and fun adventure! As I was reading Gertie Milk and the Keeper of Lost Things, I kept thinking to myself, "I would have loved this as a child and would have read it over and over again." As an adult, I appreciated learning a little history that I was unfamiliar with (I'd never heard of Mercedes Gleitze, who swam across the English Channel). And, I love a book with a young heroine. Adventurous children's books tend to skew male in the hero role; the more female protagonists making decisions, the better. I also loved the fact that Gertie is both in charge and emotional, brave but afraid, smart but flawed. Not everything is wrapped up but I don't recall it being such a cliffhanger that it put me off. Gertie Milk and the Keeper of Lost Things is the first in a series and I'm looking forward to the next book.

Cover thoughts: I love the cover of Gertie Milk and the Keeper of Lost Things! It not only contains elements of many of the interesting things about the book (so the cover image is relevant to the content), it's gorgeous and eye-catching and even looks a little three-dimensional from certain angles. Very cool!


©2017 Nancy Horner. All rights reserved. If you are reading this post at a site other than Bookfoolery or its RSS feed, you are reading a stolen feed. Email bookfoolery@gmail.com for written permission to reproduce text or photos.
Posted by Bookfool at 9:01 AM