The Secret of Nightingale Wood by Lucy Strange 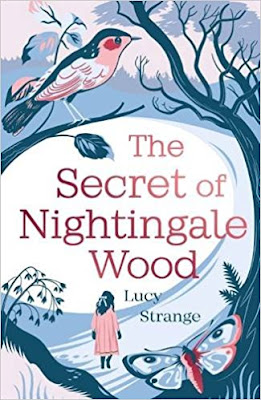 In The Secret of Nightingale Wood by Lucy Strange, a grieving family moves from London to a new home near the sea in the year 1919 and then slowly falls apart. Henrietta (known as Henry) and her family are still mourning the loss of Henry's big brother Robert a year after their London home burned. Henry's mother is dangerously depressed, her father is emotionally distant and then physically distant after he goes to work in another country, and Henry and Nanny Jane have been the only mothers Henry's baby sister Piglet has ever known. Henry adores Piglet, has a wild imagination, and roams freely in the woods behind their new home, Hope House. In the woods, Henry is drawn to a sparkling fire tended by a woman she thinks is a witch, whom she comes to know as "Moth".

When the local doctor begins sedating Henry's mama round-the-clock and locking her room, Henry becomes concerned. Wouldn't Mama heal faster if she were allowed to breathe the fresh air and hear stories? After it becomes obvious that the doctor is pushing to send Henry's mama to a mental institution for horrifying "treatments" and suspects that Henry has inherited her mother's hysteria, Henry turns to the only person she knows who may be able to help. But, will they be able to rescue Mama in time?

Highly recommended but with a warning - The Secret of Nightingale Wood is a terrifying and beautiful story but not perhaps in the way you might expect. It has a ghost, a possible witch, a mysterious man with a limp. But, those are all explained in the end and really not so frightening as the idea of an entire family being torn apart, a mother potentially tortured (Henry overhears what the doctor's experimental treatment entails), and the possibility of Henry herself falling victim to a quack doctor.

Fortunately, the book ends happily. But, I would caution anyone who has a sensitive child to let them know about the happy ending in advance. The book is recommended for about ages 8 to 14. At the age of 8, I don't know if I could have handled this book; I'd likely have gotten nightmares, although I think if someone let me know it ended happily I'd have been fine. There's a lot to love - stunning, lyrical writing, so beautiful that you may find yourself rereading sentences for the joy of it, clear love between the family members - especially Henry's adoration of her little sister, Piglet (whose real name is Roberta), and the way everything comes together in the end when Henry decides she must act. I love Henry's imagination and resourcefulness, her love of books, and her determination. A beautiful read.

Note: I have never read anything from the Chicken House imprint by Scholastic, before. I received an ARC of The Secret of Nightingale Wood for review via Shelf Awareness and I was so impressed with the quality of writing that I'd like to read more of their titles, eventually. I'll have to see if my library carries any.


©2017 Nancy Horner. All rights reserved. If you are reading this post at a site other than Bookfoolery or its RSS feed, you are reading a stolen feed. Email bookfoolery@gmail.com for written permission to reproduce text or photos.
Posted by Bookfool at 9:02 AM