The Underground River by Martha Conway 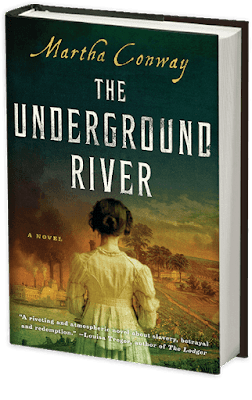 I've read a lot of really terrific books, lately, and The Underground River by Martha Conway is way up high on the list of new favorites.

The year is 1838. May is a seamstress who works for and travels with her cousin Comfort, taking care of all of Comfort's costuming needs as an actress. Comfort has located a job in St. Louis so she and May are traveling on a paddleboat down the Ohio River from Pennsylvania to Missouri when the boilers blow up and their steamboat, the Moselle, sinks. Both May and Comfort survive and are taken in by residents in the closest town but they're left with no money, no possessions, and no jobs.

When Comfort finds employment giving public speeches in favor of abolition, May is no longer needed and the wealthy abolitionist who hired Comfort offers to pay for May's return to Ohio. But, there's nothing waiting for May in Ohio, so she finds a job in a floating theater on a barge. The owner, an actor named Hugo, lost his sister when the paddleboat sank and May works hard at taking her place. As she slowly becomes acquainted with her job and her fellow passengers, May begins to develop independence and confidence, and she finds herself increasingly drawn to Hugo. But, when the abolitionist discovers May didn't use the money given to her to return home, she blackmails May into helping smuggle slaves from the Kentucky side of the river to the free side, a dangerous job that becomes even more perilous when the unexpected happens and May is forced to come up with a creative way to keep herself and a young slave from being caught.

Kind of a long description for a gal who said she was going to try to keep her reviews short but I didn't think the Goodreads synopsis was as accurate as it should have been.

I started reading The Underground River after ditching a book that wasn't working for me and was immediately pulled into the story. May is an introvert and a hard worker, a little lonely but content with her job helping cousin Comfort. But, when Comfort doesn't even defend May against the abolitionist's condescension, May realizes she's on her own.

I liked this new perspective on slavery. The thought that a slave could be separated from freedom by no more than a river was not something that had occurred to me. What must it have been like for a slave to know that some mere line, whether on water or land, separated him or her from freedom? Also, there were some details about escaped slaves that I had given little or no thought to. The Underground River was not just entertaining; it was a learning experience that I thoroughly enjoyed.

Highly recommended - I loved everything about The Underground River. Martha Conway's writing is lovely, the character development and historical setting perfect, the plotting balanced between some very tense scenes and some that were relaxed and happy, and the ending hopeful. I'm normally not a fan of books with actors or the theater at their heart but there's a mixed bag of personalities on the traveling theater barge. Some I grew to love, some stayed further in the background, some were varying degrees of villainous. May is a wonderful character and I enjoyed accompanying her, seeing her grow into herself, wondering if Hugo was just being polite to her or if his apparent affection was what it appeared (he was an actor, after all). The Underground River completely swept me away and I will absolutely seek out more books by Martha Conway.

©2017 Nancy Horner. All rights reserved. If you are reading this post at a site other than Bookfoolery or its RSS feed, you are reading a stolen feed. Email bookfoolery@gmail.com for written permission to reproduce text or photos.
Posted by Bookfool at 6:44 PM