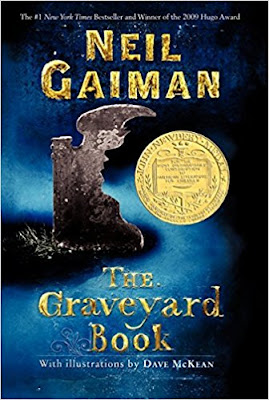 The Graveyard Book by Neil Gaiman was a reread for me and I'm not sure I ever actually wrote about it on the blog when I read it, before. At least, I couldn't find a review when I looked via Google. Incidentally, this serves as a great reminder that my blog search feature has not worked in years. The best way to look for a review on my blog is to go to Google and type in the title of a book you hope I've reviewed and "Bookfoolery". If I've reviewed the book at this blog (or even mentioned it), there will be a link.

Back to the book. The first time I read The Graveyard Book, I checked it out from my local library because I've always been a little iffy about Gaiman. I fall instantly in love with about half of his books and the other half are let-downs. I never know which will be the case and will often check his books out from the library before buying them.

I remembered exactly why I didn't love The Graveyard Book, the first time. It's got a pretty scary opening. At the beginning, a toddler's family is murdered but he's saved by the fact that he's a wanderer and the door to the house was left open. After roaming to the local graveyard (which is also a nature reserve and has been closed to new burials for some time), the murderer pursues him but the ghosts in the graveyard agree to let one ghostly couple adopt him and to work together to protect him from the man who wants him dead.

It was the gory opening that I disliked. I'm prone to nightmares and have been since I was small, so I tend to be sensitive to books that are marketed to children but which I think could give some of them nightmares. And, The Graveyard Book certainly would have given me nightmares as a child.

On the second reading, though, I knew what was coming and enjoyed it for the atmosphere, the unique setting, and the story. I didn't mind the murder at all because I knew it had to happen for little Nobody Owens, or "Bod", to enter the world of the ghosts in the graveyard. In other words, I was free to appreciate the book, the second time. And, boy, did I. Especially at the beginning of the book, I could imagine reading the book aloud to children. It's so beautifully written and atmospheric, just a stunning beginning with fog creeping around the door frame and this giggly little child completely unaware of the danger while you're thinking, "Hurry, child, hurry," and feeling the chill in the air.

And, then, the happenings in the graveyard are both wildly creative and somehow believable.  "What would happen to a human who grew up with ghosts?" One of the group members asked, and then answering herself, said: "He'd learn to fade." In other words, those little magical touches within the book seem utterly sensible, given the context.

We didn't do a show of hands but I'd say more than half of my group liked The Graveyard Book. Of the ones who didn't like it, one said it was just too geared toward children and he's not really interested in children's books. One was the member who had stopped discussion of Gaiman completely when I tried to recommend his books for discussion, earlier in the year, and she said she's just not interested in anything otherworldly at all - ghosts/spirits, scifi, fantasy, etc. She's only interested in realistic fiction. One woman said, "I don't have a problem with that. I've seen ghosts." One said, "I didn't understand the purpose of the murder, apart from placing the child in the graveyard. Why was the murderer after him, in particular?" And, another member said, "I can't analyze books like you guys do, but when I opened the book I stepped into the graveyard with Bod and stayed till I closed it. I enjoyed it. It was an experience."

What a fun discussion! We didn't have any discussion questions and we went off-topic a bit more than I think some of us would have liked to but the discussion was noisy because the opinions were so divided. I was not the only person who had trouble with a book with such a terrifying opening being marketed to children. But, apparently, I'm the only person in my group who hasn't read The Jungle Book. One member commented on the episodic nature of the book (which I noticed this time - it almost felt like interconnected short stories rather than a novel) and the group member who recommended The Graveyard Book noted that it's based on The Jungle Book, so that episodic aspect is deliberate.

OK. So, I have to read The Jungle Book, soon. Fortunately, I have a copy. The bottom line is that I liked The Graveyard Book much more the second time around. Whether or not it's appropriate for children seems to be up for debate, but the writing is stunning, you get a little peek into history via the ghosts from different eras (one of whom, for example, has no idea what a banana is), and it is, in fact, a book that won an award for excellence in children's writing, so somewhere there's a panel of people who thought it was just fine and dandy for kids. I'd still keep it from children who are prone to nightmares or read it with them.

©2017 Nancy Horner. All rights reserved. If you are reading this post at a site other than Bookfoolery or its RSS feed, you are reading a stolen feed. Email bookfoolery@gmail.com for written permission to reproduce text or photos.
Posted by Bookfool at 3:05 PM