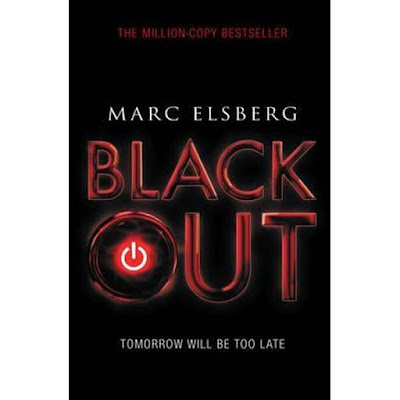 I've recently read two thrillers because I've been in a mood for fast-paced reading and neither disappointed, although Blackout is good but it also is the lesser of the two.

Blackout is a realistic novel about what might happen if the European electrical grid were taken down by saboteurs. Some of the details can be a bit of a yawn but the book is fast-paced and often very exciting.

Lights start going out across Europe. Piero Manzano, a former hacker, is in an automobile accident - one of many that happen across Europe when the traffic lights go out. After attempts to restart the power stations end up bringing up error messages, almost all of Europe is cast into darkness for an extended period. The longer the power is out, the worse things grow. If the power isn't restarted within a certain amount of time, nuclear plants can go into meltdown. Nobody can pump gas so food, medicine, fuel, and other supplies quickly run out, leading to deaths by starvation, freezing, illness, and fire. What can be done?

Manzano is the hero of the book. Shortly after the power goes out and he's injured, he has an idea. He and an elderly neighbor decide to try to contact authorities to explain what he thinks has happened. Meanwhile, you also occasionally get a brief, vague glimpse into the world of the terrorists and the reason for their plan (but only a few paragraphs at a time - Elsberg is quite the tease). As Manzano tries to help uncover the problem and come up with a solution, he also becomes a suspect and befriends a young CNN reporter who just wants a chance to break a big news story.

The author tried to stick as close to reality as possible without providing a road map for potential terrorists as this is a realistic danger, both in Europe and the United States. He guessed at what would happen with the population (with the help of at least one actual study on the possible outcome). If anything, I'd say he was a bit too kind at the outset. Having lived through Hurricane Katrina's aftermath, I can tell you that it doesn't take long at all for people to begin to panic. Fights broke out at the local gas stations in my area (well inland) within days of the hurricane's landfall as people tried to hoard gas for generators and vehicles. The grocery stores only let in a handful of people at a time and wrote transactions down by hand. All perishables were ruined. It took slightly longer for people to become desperate and dangerous in Blackout. But, the author did a great job of describing what happens without power and I found the book a pretty quick and, at times, exciting read.

Recommended - Solid, realistic storyline with plenty of exciting action. While not a favorite thriller, Blackout is, in fact, pretty realistic. And, reality involves a lot of people gathering, having meetings, and getting bogged down in expectations while a few people who are able to think outside the box end up coming up with the answers. In this case, you have a heroic outside-the-box thinker in Manzano, undoubtedly a deliberate rogue type because he needs to be an anti-hero so that he will easily fall suspect. Sometimes that worked for me and sometimes I thought it was just a useful tool that didn't quite fit. At any rate, I found the book pretty gripping. There is a large cast and I had a little difficulty keeping some of the characters distinguished from each other in my mind, at first, but eventually they crystallized a bit and I was able to just enjoy the storyline, even though I didn't always entirely understand the IT details.


©2017 Nancy Horner. All rights reserved. If you are reading this post at a site other than Bookfoolery or its RSS feed, you are reading a stolen feed. Email bookfoolery@gmail.com for written permission to reproduce text or photos.