Alan Cole is Not a Coward by Eric Bell 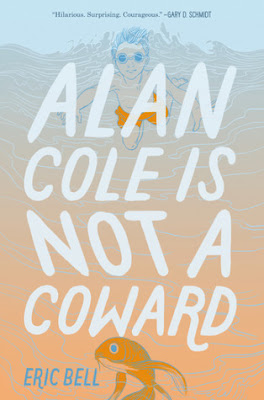 Alan Cole is a "sapling" (7th grader) at Evergreen Middle School. He has just recently come to the conclusion that he's gay and he has a terrible crush; he stutters and blushes whenever he talks to the boy he likes. Alan's brother likes to beat on him and periodically puts him through a bunch of ridiculous tests, making him complete a list of challenges. Alan never wins and he always loses something in the process. He's getting pretty fed up. And, now the punishment for not completing an almost impossible set of tasks is . . . you guessed it . . . giving away his secret about being gay. Alan knows he has to complete the set of challenges, but they are incredibly difficult: learn to swim (in just over a week), get his first kiss, stand up to his father, figure out how to retrieve piece of paper from an impossible place.

An introvert who has given up on friendship because his brother has always worked hard to sabotage his friendships in the past, Alan sits with two boys at the "Unstable Table" in the lunchroom. When they eventually find out what's happening, they offer to help Alan. Alan is hesitant to call the other two boys "friends" because of past ruined friendships, but they're determined and Alan has made up his mind that he's not going to let his brother beat him. He tells himself repeatedly that he's not a coward. This is one of the things I absolutely love about Alan Cole is Not a Coward - the use of repetitive positive self-talk to help Alan deal with his challenges at home and at school, including an extremely dysfunctional family. The family scenes portray chilling emotional abuse. You can practically hear the clock ticking during the painful meal scenes.

Near the end of the book, there is a dark moment when it appears his brother has done the same kind of damage to Alan's new friendships as he's done in the past. But, because the boys from the Unstable Table really are true friends, they're willing to take him at his word.

Highly recommended - This recently-released middle-grade gem is by far one of my favorite books of the summer if not the entire year. I loved absolutely everything about Alan Cole is Not a Coward, the hilarious, touching, and surprising story of a boy who learns to face fears and challenges with the use of positive thinking, discovers the true meaning of friendship, and unravels the source of his family's dysfunction. I just can't say enough good things about this book. It's laugh-out-loud funny, suitably complex, meaningful, and inspiring and Alan is a terrific kid; you can't help but love him. Alan Cole is Not a Coward is Eric Bell's first novel and I can't wait to see what he comes up with, next.

©2017 Nancy Horner. All rights reserved. If you are reading this post at a site other than Bookfoolery or its RSS feed, you are reading a stolen feed. Email bookfoolery@gmail.com for written permission to reproduce text or photos.
Posted by Bookfool at 2:26 PM