The Boat Runner by Devin Murphy 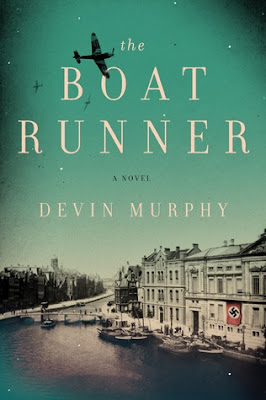 In 1939, Dutch brothers Jacob and Edwin Koopman are sent to Hitler Youth Camp in Germany. They'd really prefer to spend the summer helping their Uncle Martin, who runs a fishing boat in the North Sea so their father agrees to divide their time, instead. First, the camp, then some time learning how to fish and operate Uncle Martin's boat, and finally some time spent learning about their father's lightbulb factory from the ground up.

At camp, they find that the other boys are fiercely competitive, often violent, and many already know the routine. Some have won a particular prize that Jacob covets. Edwin, an artist, spends all his free time drawing but can be surprisingly competitive, during the games. Although their time is divided, the lessons learned from all three of their experiences will continue to linger.

Back home, their father is determined to get a contract selling lightbulbs to Volkswagen. Against their mother's wishes, the two teenagers tag along with their father to Rotterdam, where the first of many tragedies strikes when Rotterdam is bombed, Holland is occupied by Germans and their hopes to escape Europe quickly become impossible.

From here on out, the major plot points feel like spoilers to me, so I won't mention them. Instead, I'll keep it generic and tell you that The Boat Runner is Jacob's story, the tale of his emotional and physical journey through the war. Faced with numerous tragedies and traumatized by loss, bombings, and the many horrible things he witnesses, he makes a fateful decision. But, has Jacob made the right choice?

I think what I liked best about The Boat Runner was the emotional honesty. At Jacob's age (teenager/young man), many don't have a grip on their emotions and I thought the author did an excellent job of showing the shock, trauma, pain, and (sometimes misplaced) blame that came of his experiences. Also, The Boat Runner is definitely a plot-heavy book - a lot happens. And, I learned a few new things about the WWII era. I'd never heard of potato masher grenades and I didn't know RAF pilots carried barter kits containing gold coins and rings.

I did have some problems with the book like occasionally feeling like the prose was flat, although at other times I found myself stopping to reread a beautiful sentence. It might have been that I simply didn't fall in love with the author's writing style, coupled with the rawness of the story. There are some gruesome scenes; it's worth mentioning that The Boat Runner is not for the faint of heart.

Having said all that, I liked the point-of-view and I think The Boat Runner would make an excellent discussion book. The decisions Jacob made, the emotions he experienced, the historical perspective, and the situations in which he was placed are all ripe for conversation. I wondered, for example, if at times certain situations were resolved a little too easily, or the consequences didn't necessarily fit the actions, or even if other people squirmed at some of Jacob's conclusions - and a couple times, whether a scene was plausible given the surroundings.

Recommended but not a favorite - A very good WWII book, extremely emotional, sometimes beautifully written and sometimes a little too descriptive for my taste, definitely worth discussing. I would have preferred to know precisely when the events were occurring without having to look them up. Dates at the chapter headings would have been helpful. My copy was an ARC sent by Goodreads, so I can't say for sure dates were not added but the only date I saw was in the cover blurb.

Note: I looked up a lot of images while reading The Boat Runner and I found it particularly interesting that there were images of boys in Hitler Youth Camp doing exactly the activities that the author described. If you read the book, I highly recommend looking up images from the time period. While the author has been called out for some inaccuracies, I found a lot of what I looked up matched the descriptions and seeing the images always adds an interesting dimension to the reading.

©2017 Nancy Horner. All rights reserved. If you are reading this post at a site other than Bookfoolery or its RSS feed, you are reading a stolen feed. Email bookfoolery@gmail.com for written permission to reproduce text or photos.
Posted by Bookfool at 1:37 PM

Email ThisBlogThis!Share to TwitterShare to FacebookShare to Pinterest
Labels: ARC, Devin Murphy, HarperPerennial, recommended but not a favorite, WWII