An American Family by Khizr Khan 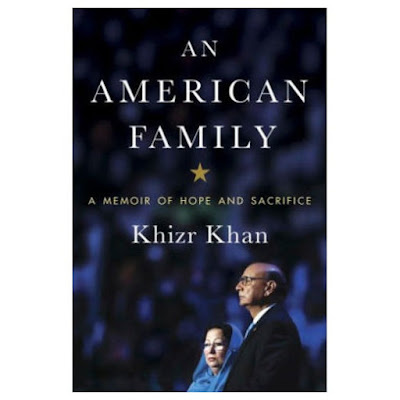 I read An American Family by Khizr Khan near the end of September so there are details I've forgotten. But, the one thing that really sticks with me is the sense of admiration I felt for the author and the experience of reading about how much pain the family went through after losing their son to a bomber in Iraq.

Let me back up a little, in case there's anyone out there who is unaware of who Khizr Khan is, since I spent many years refusing to talk politics or vote. Khizr Khan and his wife are gold-star parents (meaning parents who lost a son or daughter during his or her American military service) who spoke at the Democratic National Convention in 2016. He had harsh words for Donald Trump, who had criticized both Muslims and John McCain, the congressman known for his many years as a Vietnam Prisoner of War. After Khan's speech at the DNC, Trump verbally attacked Khan.

I was impressed with Khan's speech and his measured response to Trump's attacks, although reading the speech in the book, it really does appear quite harsh. Still, I found what little I heard about Khan and his story compelling, so I was very excited to get an Advanced Reader Copy of his book, An American Family.

The author goes all the way back to his youth to tell his story. As a child in Pakistan, he lived in poverty but he was determined to become a lawyer. Because of his financial situation, it took a lot of hard work and faith to get to law school and then neither he nor his parents could come up with the money for him to take what we call the Bar Exam (I don't recall if it's called that in Pakistan, but it was clearly the same - a test that allows one to practice law), although a leap of faith and a dollop of courage led to that opportunity. The story of how he acquired his education and the words of wisdom that were repeated to him as a child are fascinating enough alone. But, you also get to read about Khan's love story - how he met his wife, Ghazala, and why her mother wanted her to marry someone else in an arranged marriage but Khizr won out. It's a truly beautiful story.

He talks about the decision to leave the country for a job, rather than staying in Pakistan, where he knew that bribery had a lot to do with the outcome of a trial, and the steps in his career and further education that eventually made his family financially secure. He talks about his three children, their differing personalities, and son Humayun's decision to join the military. You really get to know and admire the family. While Khizr Khan was strict enough that today he'd probably be referred to as a "helicopter parent", it's clear that he and his wife raised children with strong principles and a deep love of their country.

Near the end of the book, the focus is on Humayun and his death - and it is heart-wrenching. The author also talks about how Ghazala eventually worked through her pain by hosting young military recruits for a dinner and giving each a gift, encouraging them in service in spite of her own loss. I could hardly breathe through the last part of the book for all the tears. While his Muslim heritage is a huge part of his life, faith mostly comes into the book in a soft way, in moments when he explains how his beliefs figure into certain decisions and actions, although it's a huge part of his life. This quote, for example, explains how he came to give Ghazala a certain gift that impressed her:

Islam teaches that the Creator made nothing in a cage, and that to release one of His creations back to the wild was an act of kindness and mercy.

~ from p. 53 of ARC (some changes may have been made to the final print version)


Highly recommended - A deeply moving and admirable story of the author's life and that of his family. Every now and then you read one of those rare memoirs that makes you think, "I wish I knew the author. I would love it if he was my neighbor." That's how I felt while I was reading An American Family. They sound like absolutely lovely, giving people and I wish I knew them. Near the beginning of the book, you find out about how the author discovered the U.S. Constitution and why he carries a copy of it around with him. While he didn't actually intend to end up in the United States, it's quite interesting to read about that early connection and how his understanding of our Constitution has influenced him, over the years, and how his home country compares. A new favorite memoir. I can't think of a single negative thing to say about this book, although it's worth mentioning that it's a very emotional read.

©2017 Nancy Horner. All rights reserved. If you are reading this post at a site other than Bookfoolery or its RSS feed, you are reading a stolen feed. Email bookfoolery@gmail.com for written permission to reproduce text or photos.
Posted by Bookfool at 4:57 PM