Ally-saurus and the Very Bossy Monster by Richard Torrey 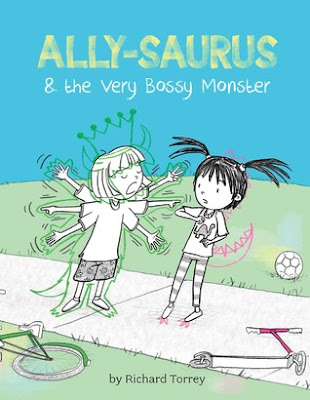 Ally-saurus is a little girl named Ally who likes to pretend she's a dinosaur. I reviewed the first Ally-saurus book, a few years ago:

Ally-saurus and the First Day of School by Richard Torrey


In Ally-saurus and the Very Bossy Monster, Ally-saurus is still imagining herself as a dinosaur. As in the first book, each child's imaginary self is shown with a crayon outline - a dinosaur around Ally-saurus and a top hat on her friend Kai, who pretends to dance across a stage when he's on the porch stairs. Her younger brother Petey just loves to show off his bear.

All is well until a bully named Maddie moves into the neighborhood. Maddie likes to boss everyone around, telling them what to do and not do. She makes up the rules to please herself. But, now she wants to be a monster (as shown by her green monster outline) and she insists that everyone must follow her rules for playing the monster game. No roaring, no saying "Ta-da", no carrying bears around. Maddie insists that monsters say things like "Grack-a-crack", they have warts and horns, and they're smelly and slimy.

At first, Ally-saurus, Kai, and Petey are simply stunned at Maddie's rules for playing at being monsters. But, then Maddie takes Petey's bear away and that is, as they say, the proverbial straw that breaks the camel's back. Ally-saurus gets up and roars.

"If you are going to play monsters with us," she said, "You have to follow the rules!The first rule is: we can be any kind of monster we want to be," said Ally-saurus. "Hairy and ugly, a dancer . . . even a dinosaur. We can say whatever we want to say:'Grack-a-crack,' 'Roar!,' or 'Ta-Da!' . . . And finally," said Ally-saurus, "nobody takes Petey's teddy bear!"


Ally-saurus and the Very Bossy Monster is, of course, a lesson in how to deal with bullies: You can still play with them but don't let them dictate all the rules.

Recommended - As with the first book, I'm a big fan of the way the author and illustrator uses the crayon outline to show a child's imagination. I also love the fact that Ally-saurus, her friend, and her brother hear out Maddie's ideas. But, it's the fact that Maddie takes away her little brother's bear that spurs her to action. Petey is smaller than Maddie and he needs a defender. So, Ally's not just standing up to a bully for herself; she's acting as a protective big sister. I love that. Just about everyone experiences a problem with bullies, at some point (or becomes one) so Ally-saurus and the Very Bossy Monster would make a super book for everyone to own - to prepare little ones for the bully they may have to deal with and to discuss why bossing other children around is unacceptable, whether at home or in a classroom setting.

Side note: We had a bully problem when my eldest son was 5 years old and a little boy kept grabbing Eldest's toys while they were playing in an an enclosed courtyard. The little bully did this for several weeks before we hit upon a solution. I told Eldest, "The next time he tries to take your toy away, pick it up and come inside. Tell him you don't want to play with him if he's going to be a bully." Eldest did exactly as I said. I was sitting on the doorstep so we both went inside and closed the door. Within minutes the little bully knocked at our door. He apologized and asked Eldest if he would please come back outside, promising not to grab his toys without asking. We're talking about a 4-year-old child, here. Bullying can start young. But, in this case, the young child really just wanted a playmate and didn't realize he was doing anything wrong. My son and his grabby playmate became the best of friends. So, I think the way Ally-saurus handles her bully problem very well could work in real life. Sometimes, very young bullies are not aware that they're doing anything wrong until someone tells them.

©2017 Nancy Horner. All rights reserved. If you are reading this post at a site other than Bookfoolery or its RSS feed, you are reading a stolen feed. Email bookfoolery@gmail.com for written permission to reproduce text or photos.
Posted by Bookfool at 5:50 PM