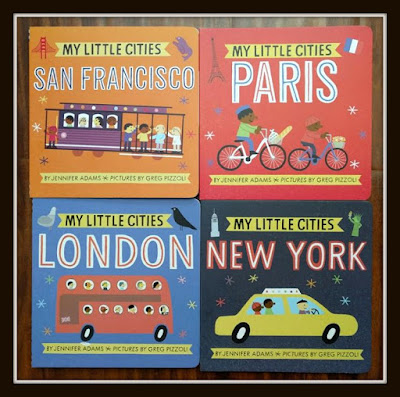 The My Little Cities series of board books by Jennifer Adams and Greg Pizzou are all similar but each, of course, contains images from the titled city. They have limited words, so if you're not familiar with the sites shown in the book, you can refer to the additional material at the back.

Why would you want to buy board books about big cities around the world? Well, I'll illustrate by telling a story about Paris. When I was 17, I went to London for several weeks with a friend whose father lives there and we spent a weekend in Paris. We took an elevator rather than climbing the stairs to Montmartre, one evening, because we were wearing dresses and heels. On the elevator was a young couple with a toddler. The toddler yawned and her mama said, "Are you fatigué?" with an American accent. I was surprised that someone would take such a young child across the ocean but I've since seen plenty of people taking very small children along on their travels around the world - and, of course, plenty of people move to these cities for business purposes, bringing family along. So, there are definitely little ones who could use either an introduction to the places they're going or a reminder of where they've been. And, you're never too young to learn about the world, whether you're able to explore it or not. I'm a big fan of introducing children to the wider world.

I received the 4 books shown above for review from Chronicle Books and I enjoyed them. Each is a rhyming book with a couple words on each page and additional information in the final spread. Here's an interior shot from My Little Cities: London: 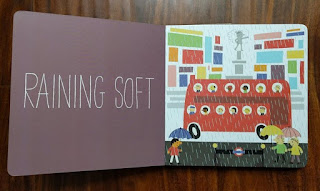 My Little Cities: London - London is one of my favorite cities in the world and I think the author and artist did a great job of portraying some of its interesting features for the tiny board book crowd. Because there is identifying information at the back of the book (true of the entire series), I had fun trying to identify each of the locations in all 4 of the books and then checking the back to see if I was correct. You can see why the artist's style might make identification a tiny bit of a guessing game if you've only seen photos of the landmarks he illustrates. They're blocky and colorful, though not vague enough to make anything familiar difficult to identify. The info in the back of the book for Piccadilly Circus, shown above:

Piccadilly Circus is a public space in London's West End where Regent Street meets Piccadilly. There, you can enter the Piccadilly Circus tube station, which is part of the London Underground. The Circus is filled with electronic billboards and has a fountain topped with a statue widely thought to be of Eros, the Greek god of love, though the statue is actually of his twin brother, Anteros.

Other sites and structures shown in My Little Cities: London are The Tower of London, the Shard, Trafalgar Square, the Natural History Museum, Tower Bridge, Abbey Road, Buckingham Palace, the London Eye, and Big Ben.

My Little Cities: San Francisco - The landmarks illustrated are The Golden Gate Bridge, Alcatraz Island, Lombard Street, the Ferry Building, Chinatown, City Hall, Pier 39, the Cliff House, cable cars, and the Painted Ladies Victorian row houses. I had a little trouble with the San Francisco book in that the descriptive final page spread talks about the ferry building's location in the Embarcadero without elaborating. I recall looking up "Embarcadero" while reading a novel, before I visited San Francisco. It's not an obvious descriptor if you haven't been there. I also thought the words "travel high" with an image of the Golden Gate Bridge (people walking across the top?) made for a slightly iffy depiction of the bridge.

Recommended - Boldly illustrated board books with cute little rhyming words that don't say much about each illustration, perfect for very young children. Further information at the back of each book can be used to either answer questions or talk about illustrations. A cute way to take a virtual tour of a city, whether you're intending to travel there or not and great for throwing into a carry-on.

Note: I have no idea what happened to the text to alter the final paragraphs in this review and I've been unable to fix it. This is a continuation of Children's Week and I'm a bit late getting started today, thanks to a headache. I'll attempt to write another review or two but if I'm unable to do so, Children's Week will continue into Friday and I'll post a cat photo at the end of the day or on Saturday morning.


©2017 Nancy Horner. All rights reserved. If you are reading this post at a site other than Bookfoolery or its RSS feed, you are reading a stolen feed. Email bookfoolery@gmail.com for written permission to reproduce text or photos.
Posted by Bookfool at 2:13 PM