Dough Knights and Dragons by Dee Leone and George Ermos 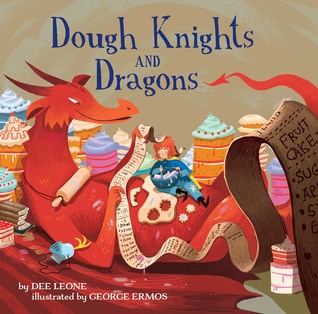 In a magical kingdom far to the east,lived a very small knight and a very large beast.

One day while collecting fresh herbs in a glen,the young knight discovered a well-hidden den.


So begins Dough Knights and Dragons. You can imagine what lives in that "well-hidden den," right? Of course. A dragon. But, before he meets the dragon, the young knight discovers a well-stocked kitchen with ingredients that are new to him and cooks up a pot of soup, just for fun. Then, out comes the dragon. Will he eat the boy?

Well, no, because the dragon really likes the soup and he just happens to enjoy cooking as much as the young knight does. So, they hang out in the kitchen together and discover they have a shared passion for baking. They spend some time baking marvelous treats before remembering that they soon will have to look at each other as enemies, again.

Each year, knights and dragons fight each other in front of their two kings and the kingdoms. A young knight is expected to prove himself by killing a dragon with his sword, while a young dragon must show his courage by roasting and eating his competitor, a young knight. And, this year, it's their turn.

They've just discovered how to make doughnuts by dropping dough in a vat of oil heated by the dragon's flame when the knight and dragon come up with a scathingly brilliant idea. The rules only say a knight must stab a dragon and a dragon must shoot cook and eat a knight. They don't say the knights and dragons have to be real.

In preparation for the annual event, the young knight and dragon (who are unnamed) make dragons and knights out of dough. And, in the ring, when they face each other the dragon pulls out a vat of oil, the boy takes the dough shapes off his shield, and they make dough knights and dragons. After doing what they believe is required of them, the young knight stabs his remaining doughnut dragons and offers them to the king and the dragon offers the knights he's created with his flames.

At first, the dragon and human kings are shocked. But, then they eat the doughnuts and they're so good that the two kings end up finishing all of the doughnuts off. From now on, the competition will be a bake-off. In my words. They don't actually refer to it as a bake-off.

Highly recommended - While I would have preferred this particular story was told in prose rather than rhyme, it really didn't matter. I love the story, the clever plan two new friends come up with to avoid having to try to kill each other, and the idea that friendship and warmth are formed in a kitchen. And, I do love the illustrations. I think one of the features of children's picture books that always draws me back is the colorful illustrations. I just love them - some better than others, of course. In Dough Knights and Dragons, I could almost visualize myself walking right into that den and cooking along with them. It looked very welcoming and I loved the chosen colors and expressiveness of all the characters.

©2017 Nancy Horner. All rights reserved. If you are reading this post at a site other than Bookfoolery or its RSS feed, you are reading a stolen feed. Email bookfoolery@gmail.com for written permission to reproduce text or photos.
Posted by Bookfool at 11:24 AM