We're celebrating our first really autumnal day (although, of course, it's not apparently going to last) by throwing open the windows. The cats and I are in total bliss and I decided I must rush outdoors to photograph the latest book acquisitions. Fiona kindly posed. 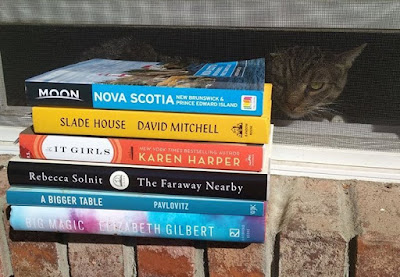 Recent arrivals (top to bottom - all were purchased except for The It Girls):


Slade House, The Faraway Nearby, and Big Magic (which I checked out from the library and have wanted to own, since) were all purchased on Wednesday evening when I spent the night in Oxford, Mississippi, where I was needed to sit in Kiddo's apartment and wait for a delivery, the next morning. We went to Off-Square Books after eating dinner: 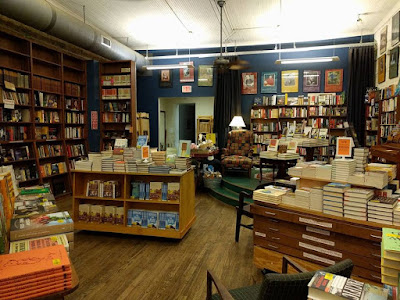 
I was focusing exclusively on The Boat Runner when I saw a friend's review of Dark Matter and decided I needed to take a break and read something suspenseful. I bought Dark Matter several months ago and, wow, Debbie was right. It was almost impossible to put down. The only reason I managed to set it down at all was because I started reading late enough at night that my eyes grew heavy. Dark Matter is a terrific read. I finished up The Boat Runner, last night, a WWII novel about a young Dutch man who is sent to Hitler Youth Camp with his brother just prior to the occupation of Holland by Germans and his experiences during the war.


Not a big week for blogging, since I was gone in the middle of the week, but boy did I have fun reading in a hotel room alone!!

Hmm, I'm between books and not sure which to focus on, next. A Bigger Table just arrived this afternoon and I immediately sat down to read the introduction (so excited about it that I didn't even fetch my reading glasses; I just read it blurry). so I'll undoubtedly add that to the current reads. I'd also like to get back to The Half-Drowned King by Linnea Hartsuyker and get that finished up but I'm well aware that it's a slow read so I might, instead, focus on finishing up The Goddess of Mtwara (a book of prize-winning African short stories). Whenever I take the time to read a story in The Goddess of Mtwara, I'm always frankly blown away by the quality of the writing, although a couple of stories are so very, very African that I just had to read between the lines. At any rate, there's nothing I feel like totally abandoning, but I'm not entirely sure what I'll pick up when I climb into bed, tonight. We shall see.

I'm so excited about the cool air I can hardly stand it. I completely forgot we were expecting a cool front until about noon and then I rushed to open the windows and the cats were happy as clams. Then I had to shut the windows to go to the gym. When I arrived home, they were sleeping but they came running when they heard the kitchen windows go up. Opening the windows has the same effect as popping the top of a can of cat food. We have so little open-window weather that it's just as exciting for me but I don't fit on the window ledge so I guess I'll have to go out and trim bushes to enjoy the air. Or sit outside reading!!! Oooooh. There's a thought!


©2017 Nancy Horner. All rights reserved. If you are reading this post at a site other than Bookfoolery or its RSS feed, you are reading a stolen feed. Email bookfoolery@gmail.com for written permission to reproduce text or photos.
Posted by Bookfool at 4:19 PM