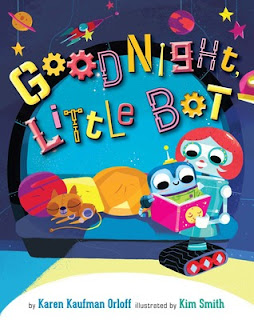 Goodnight, Little Bot by Karen Kaufman Orloff and Kim Smith is a book about a little robot's going to bed routine. There are some similarities to the human litany (take a bath, read a book) and some charming differences (plug in to recharge, comb your circuits). It's a simple book that contains nothing overly surprising or unique beyond those few differences between a robot's routine and that of a human child but the illustrations are super cute. I'm a fan of robots and I enjoyed the illustrations more than the story, itself.

I was slightly bothered by the fact that the robot is shown snacking on batteries, since children do put dangerous things in their mouths. While I personally wish that had not been put in the book at all, I'm also aware that there's a way to overcome that problem, by playing a game relating to food. "Ew, we don't eat batteries. Yuck! What do we eat?" Talking about foods that are acceptable versus batteries or other things a robot might be shown munching on . . . I don't know, nuts and bolts? . . . could also lead to doing similar with the other differences between robot and human routines.

Neither recommended or not recommended - Love the illustrations and it's always nice to have a few bedtime stories that are just about the routine, itself, but apart from the cool robot pictures there is little that I found outstanding about Goodnight, Little Bot and it seriously bothers me that the robot is shown eating batteries. They're tremendously dangerous. If you're willing to use the robot's eating habits as a lesson, though, it's definitely a terrific visual experience.

©2017 Nancy Horner. All rights reserved. If you are reading this post at a site other than Bookfoolery or its RSS feed, you are reading a stolen feed. Email bookfoolery@gmail.com for written permission to reproduce text or photos.
Posted by Bookfool at 3:34 PM