Quite a change after last week's pile but this time only a week has passed and look at the cover of Gertie Milk and the Keeper of Lost Things! Is it cool or what? 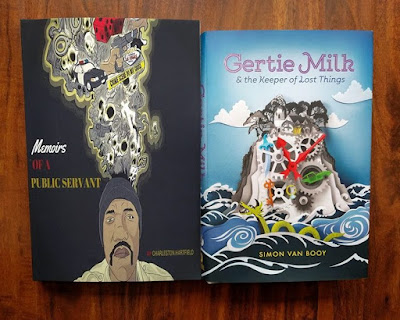 
I read about Memoirs of a Public Servant in a news article about the victims of the Las Vegas shooting. Charleston Hartfield, a former police officer, was among those killed and the article I read mentioned his book. I used to read quite a few books by or about police officers back in the days when I thought I wanted to be a mystery writer so I figured it would be an interesting read. It's got some slight formatting issues but looks like a quick gulp of a book and I'm looking forward to the reading.

I read every book Simon Van Booy publishes, of course, so I pre-ordered Gertie Milk and the Keeper of Lost Things when Simon told me about it. It's the first in a Middle Grade series and I've already read it, although it took me 5 days because I was still recovering from my recent trip and kept falling asleep. I napped a lot, this week, too. More about Gertie Milk will be coming soon, but I can tell you it's a wild and wacky ride.


Almost all of my reading was chosen with my current state of fatigue and slumpishness in mind, although I was very excited about Iowa and Gertie Milk because they're both books I've been waiting on for quite some time. The last couple of months, between and during travel, my reading took a serious beating. Children's books and poetry just happen to be two of my slump breakers and I had plenty waiting for me. And, they did the trick! Sleep might have helped a bit, too, but it took me all week to recover from both Hawaii and the long night of watching the news about Las Vegas (I just happened to be up when that horror occurred).

OK. You know I've been listing some that I have bookmarks in but which I'm not currently reading, right? Well, this week was an improvement. After all those children's picture books and the one MG broke my post-vacation slump, I managed to pick up The Goddess of Mtwara and read two stories, both of which were excellent (they are prizewinners, of course, but sometimes African stories are so heavy in African names and local references that they can totally lose a reader from Elsewhere). Then, I started The Boat Runner because I wasn't yet in the mood to pick up The Half-Drowned King, knowing how dense it is. But, I no longer feel like tweeting instead of reading, so I'm feeling very positive about the coming week's reading and have the sense I'll probably finally get back to the books I've set aside.

There's not much news but there's one question I've been asked 3 times since we returned from Hawaii: "Is the water pretty?" To answer that, here's a photo I took just off the coast of Oahu from the air: 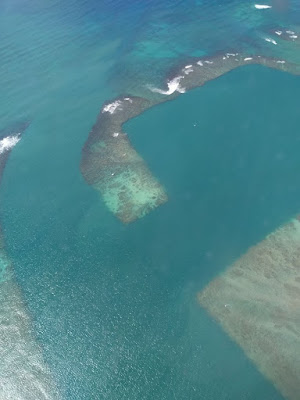 Clearly, the answer is "yes". We didn't do any snorkeling on this trip (although, if you go back and look at posts I made in November of 2007, you will see that we once went snorkeling off Oahu) but the water is lovely and I did see a lone sea turtle, at one point. So, that's cool.

©2017 Nancy Horner. All rights reserved. If you are reading this post at a site other than Bookfoolery or its RSS feed, you are reading a stolen feed. Email bookfoolery@gmail.com for written permission to reproduce text or photos.
Posted by Bookfool at 7:48 PM