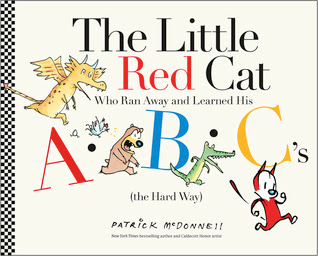 The Little Red Cat Who Ran Away and Learned His ABCs (the Hard Way) by Patrick McDonnell is, first of all, a book with a mouthful of a title. If I had little ones, right now, I would definitely refer to it as, "Little Red Cat" or "Red Cat ABCs." And, I'd definitely have to come up with some kind of shorthand because I have a feeling little ones will want to read it repeatedly. The illustrations are a hoot.

The first thing that happens, of course, is that a little red cat runs out the door of a house. Oddly, The Little Red Cat Who Ran Away and Learned His ABCs is completely wordless. The story is told through the illustrations and it's up to the grown-up to dictate the storyline for the youngest readers. That totally stunned me when the book first arrived. I loved the illustrations but there were a couple panels in which I was unsure of what the letter for that particular page represented. And, then I discovered the alphabet at the back of the book. The author has provided a list of the words each of the letters of the alphabet represent. So, once you've figured that out, you're golden.

The second time I read the book, I had no problem with the storyline. The illustrations make it perfectly clear and you'll find that the lack of words is no obstacle to the story. In fact, it may even be a little more fun not being constrained by someone else's word choice.

Not-so-quick synopsis: A little red cat goes outside to play but immediately encounters an alligator with open jaws. The alligator wants to eat him! The red cat runs away, past a brown bear, past a chicken. As he runs, each animal follows. When they encounter a dragon, the chicken is so frightened she lays an egg. The dragon blows fire at them and they all put on sunglasses (this was a frame I had trouble with: G is for "glasses"). The cat thinks, "I want to go home!" But, he keeps running. It snows and the alligator, the bear, the chicken, the dragon and the egg (who has miraculously sprouted legs) slide on ice. They swing through a jungle and run past a castle with a king and a princess peering out a window. The princess points out a sign with a picture of the red cat on it and you get to see one of only two words in the book, here: "LOST". The animals cross a mountain range and come to a cliff. "NnnnnOoooo!" shouts the dragon, but it's too late. The other animals fall over a cliff. Fortunately, they all have parachutes. They come to a sign with arrows but no words and they all have a question mark over their heads. They decide to stop for a restroom break. The sun is setting. Everyone is tired. But, then a unicorn shows up with the king and princess on its back! The princess hands out valentines and the other animals wave goodbye to the cat, then the king hands the red cat a scroll. It's a map and X marks the spot - the map leads home! The cat arrives home and runs straight to his bed. He yawns and then falls asleep and Zzzzzzz, sweet dreams.

Highly recommended - Clearly, the story in The Little Red Cat Who Ran Away and Learned His ABCs (the Hard Way) is an obvious one, easy for a parent or teacher to describe and dramatize. The illustrations are a delight, most of the words that go with the letters obvious enough to make telling the story a breeze (a handy key in the back clarifies if you're unsure about any of the words that go with each letter), and the story comes full circle with a happy ending. Great for home or school.

This is Book #4 for Children's Week. I forgot to mention that the last review was #3. Oops. Quite a few more children's book reviews are on the way!

©2017 Nancy Horner. All rights reserved. If you are reading this post at a site other than Bookfoolery or its RSS feed, you are reading a stolen feed. Email bookfoolery@gmail.com for written permission to reproduce text or photos.
Posted by Bookfool at 12:31 PM