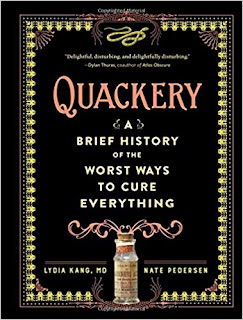 I have a fascination for medical history and Quackery: A Brief History of the Worst Ways to Cure Everything by Lydia Kang and Nate Pedersen, is a wacky look at the way medical practitioners -- going back thousands of years -- have attempted to treat illness, often poisoning, harming, or even killing patients in the process.

The first chapter, about such wondrous techniques as "purging" (from both ends) by way of various poisonings, is by far the most stomach turning. I'm glad to say that most of the remaining chapters (opiods, water treatment, mesmerism, bleeding, etc.) are an improvement, horrifying as they may be. Except maybe the one in which people were burned in one spot to stop pain in another. Ouch.

The authors insert a bit of the gallows humor medical practitioners are known for, throughout the book. If you've got medical professionals in your family or circle of friends, you know that's pretty common. I found the use of dark humor a tiny bit annoying, at first, even though I literally laughed out loud at least once. But, I became accustomed to the writing style and eventually it didn't faze me at all.

I found a few little tidbits particularly interesting, such as the information on leeches (still used in medicine, though more sparingly - eww) and the actual story of the first "snake oil" salesman from which we get the term that describes quack cures. But, I was particularly fascinated with the general impression I got about today's quackery. Yes, we still have quack cures popping up in our modern world. But, it's interesting to note that even some of today's fast fixes and medical advice have roots in fad "cures" of another century and that while most of what's mentioned in the book failed miserably, some real, functioning cures were merely poisonous at the wrong dosages and are effective, today.

The only problem I had with this book is that all of the image captions but one (not sure why there was one exception) were written in Latin. Update: At the time I wrote this, I had no way of finding out whether or not the captions in the final print copy were English or they'd left them those annoying Latin captions in place. Fortunately, a friend is reading Quackery and she said the final print version does have English captions beneath the photos and illustrations. Whew! Thanks, Michelle!

Highly recommended for history lovers with strong stomachs - You can't be faint of heart to read Quackery (well . . . maybe you can, but you'll need to take breaks), but it's very entertaining and definitely a book I'd recommend to those who like quirky history in general, medical history in particular, and gorgeous enough to make a great gift idea. I received an ARC from Workman Publishing and the ARC is entirely printed in black and white, but the final print version is, according to the publicity info, full color. Even in black and white the illustrations are stunning so I'm planning to seek out the full color version, if only to peek inside and see what it looks like.


©2017 Nancy Horner. All rights reserved. If you are reading this post at a site other than Bookfoolery or its RSS feed, you are reading a stolen feed. Email bookfoolery@gmail.com for written permission to reproduce text or photos.
Posted by Bookfool at 6:18 AM