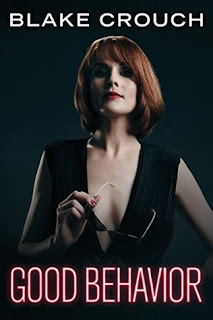 Good Behavior by Blake Crouch is not a novel but a collection of three novellas starring the same heroine, Letty Dobesh. Letty is a meth addict and a thief. Her behavior is so far from anything I've ever known or experienced that it's worth mentioning up front that you may find her a character impossible to relate to. That doesn't matter. The point is the taut plotting, the tension, the exciting action scenes, and Letty battling with herself, her needs, and her desire to stay clean and crime-free long enough to find and become mother to her son, again. While Good Behavior collects three Letty Dobesh stories under one title and the same title has been used for the TV series about Letty (which I have not seen), the stories don't all directly match up to the television episodes.

I read the Kindle in Motion version of Good Behavior, which was available from the Amazon Prime Library when I checked it out, a couple months ago. "Kindle in Motion" means there are some features you wouldn't find in a typical e-book, like gifs from the TV series, still photos, and the neon title flashing on the cover image. There is also some extra text describing the creation of Letty, the writing of both the stories and the series, which stories appear in the series and in what order, and the differences between the stories and the script.

The Pain of Others - In the opening novella, Letty Dobesh has recently been released from prison and gone straight to robbing hotel rooms with the help of someone who works in the hotel and has acquired a master key card. All is going well, for a time. Letty happily stuffs her bag full of electronics, jewelry, and the contents of the mini bars. Then, she hears a key card in the final lock. Unable to escape, Letty hides in a closet and overhears plans for the hotel patron to do a hit job. Should she call the police or stay out of it? Her decision will put her in danger, either way. What Letty decides is both fascinating, terrifying, and shocking. The ending will make you rethink the entire story and Letty's decision.

Sunset Key - The most heart-pounding of the three stories shows Letty with an everyday job, at the beginning. But, then she loses her job and is bang out of luck. Where will she go and what will she do? Whenever things go wrong, her first thought is getting a fix. But, then a dangerous man named Javier offers her an opportunity. A fabulously wealthy man is about to go to prison for the rest of his life and he wants to spend a single night with a beautiful woman. He owns a valuable painting. If Letty can snatch the painting and get off the island in the Florida Keys quickly, the payoff will be substantial. Letty is hesitant because it sounds more like prostitution than anything else, but she agrees when she hears her job is theft. Everything seems to be going well, but then the job is turned on its head and Letty realizes nothing she was told was the truth. Will Letty get off the island or will she die at the hands of a truly evil man?

Grab - Letty is tired of living from one drug fix, theft, or prison sentence to the next and decides it's time for a major change. So, she hits the road, intending to drive from the South to where her young son lives, in the Pacific Northwest. But, then she realizes she's being followed. Letty confronts the man and finds he's been tracking her because he heard she's good at what she does and he needs a very good thief to help him pull off a heist in Las Vegas. She's not that far from Vegas and the heist is a high-dollar theft. The only thing that keeps Letty from getting high when she's down is stealing. So, she agrees. But, things don't go quite as planned. Their getaway driver disappears and Letty's former therapist is in town, so she asks him to drive for them. He's suicidal. Will he show up at the right time? A surprising twist at the end of this story explains that absolutely nothing was as it appeared.

Highly recommended - I have not yet felt like Blake Crouch let me down. His stories are tense, his characters well-developed, the action thrilling. There's always something that isn't quite what you think it will be, but Crouch really used that to heart-pounding advantage in all three of these stories. Letty is a character that you don't have to relate to and don't even desire to. She's intruiging, kind of a nightmare, and a walking contradiction. You just want her to survive. But, you never know for sure if she will.


©2018 Nancy Horner. All rights reserved. If you are reading this post at a site other than Bookfoolery or its RSS feed, you are reading a stolen feed. Email bookfoolery@gmail.com for written permission to reproduce text or photos.
Posted by Bookfool at 11:12 AM