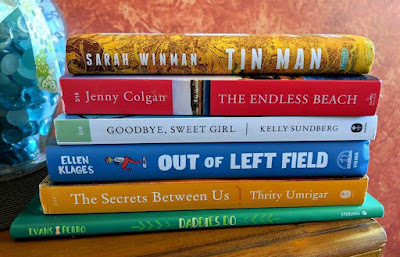 I've got an ARC of Tin Man and already read it (working on the review), so the finished copy shown above is just a bonus and I'll pass my other copy on to a friend, preferably another blogger. Out of Left Field is another middle reader, I think. I'm really enjoying all the middle readers and the occasional YA I've been getting, lately. The Secrets Between Us is the sequel to The Space Between Us, which I reviewed for HarperCollins' First Look program, eons ago. In fact, it was one of the rare ARCs from those days that I kept because I loved it so much. I just looked at my ARC and it was a January, 2006 release. There's a 2005 release next to it on the shelf, so that means I've been reviewing for publishers for at least a dozen years. If I can find the time, I may reread The Space Between Us before reading Secrets.  Daddies Do is a children's picture book, so of course I sat right down and read it immediately. Goodbye, Sweet Girl sounds like a combination of harrowing and uplifting as it's the story of one woman's experience with domestic violence and how she "learns to believe that she deserves better".


Loved them all. Boots on the Ground was particularly moving, with personal stories of experiences in Vietnam interspersed with what was going on politically and throughout the country, at the time (a light overview). The ending chapter pulls the book together and pierces your heart. It's so moving.


I don't normally mention DNFs in my Monday Malarkey but I got quite far into this one before giving up (160-something pages out of 350-ish). It's about a woman who discovers her husband is having an affair just months after she gives birth so she immediately files for divorce. Because they have a child, she's unable to move home to Chicago from Connecticut without likely losing custody. So, she's dealing with being a new mother, betrayal, and being a fish out of water at the same time. Unfortunately, I found the story trite, unrealistic, and predictable. When I realized I wasn't enjoying it, I flipped to the end to see if the end made it worthwhile to continue reading and it didn't excite me in any way (I don't mind knowing an ending if I question whether or not a book is worth sticking out) so I gave up. I think the reason I stuck it out for so long was because it was a change of pace and I like variety. It just wasn't for me, though.


I read a few pages of Don Quixote, this week, and they were awful. Ugh. Seriously, I may just have to devote a week to finishing off this book, sometime soon. It's starting to really drive me nuts that I've made so little progress. Book 2 of Don Quixote is just not as good as the first. Mad Boy is set during the War of 1812 with raggedy Redcoats pillaging the land and a single skirmish (so far). It can be pretty raw and graphic, at times, but the writing is excellent and I'm invested in young Henry's quest to bury his mother by the sea.

I'm nursing a book-related injury. While moving my stack of this month's finished books to put Boots on the Ground in the right place (I pile them by size), I managed to knock 3 children's books off the shelf and onto my bare foot, where they all hit with astonishing precision. Wow, did that hurt. I iced it down but still have a whopper of a bruise that covers almost the entire top of my foot, along with a bit of swelling. I'm sure it would have been worse, had I not gone to bed with an ice pack wrapped around my foot. Putting on shoes was interesting, this morning (I think I'll survive, but it stings a bit). I've tripped over piles of books, before, but this is my first falling-book injury. Fortunately, it really has to do with the fact that my finished-books pile for April is a biggie. So, that's cool.

Still watching and enjoying Season 1 of Psych and I'm on Season 7 of Doctor Who, the first season starring Jon Pertwee, but that's about all I've watched. No movies and only one night of regularly scheduled TV.


©2018 Nancy Horner. All rights reserved. If you are reading this post at a site other than Bookfoolery or its RSS feed, you are reading a stolen feed. Email bookfoolery@gmail.com for written permission to reproduce text or photos.
Posted by Bookfool at 1:48 PM