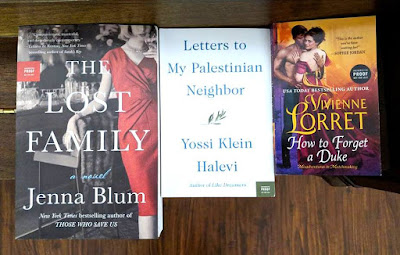 
Variety is clearly my watchword. I'm excited about all three of these books. The Lost Family is my #1 Most Wanted summer title (release date is in June) and Vivienne Lorret wrote one of the stories in the Christmas romance anthology I read in December. I remembered her name when I saw How to Forget a Duke on offer and jumped at the opportunity to request it.  I don't read romance often, but I do enjoy it for the change of pace.


I finished the latter two books this weekend, thanks the fact that I had such an awful reading week that I told my husband I was going to read until my eyes crossed. I ended up only reading between chores, but I still managed to finish the two books and get all of our intended weekend tasks finished, so I'm declaring the weekend a success.


Oh, man. I am getting so tired of typing "Don Quixote" every week, at this point. And, I didn't read a single page, last week. This week, I'm going to shoot for 200 pages. Wish me luck. We're now about 10 days away from F2F group discussion, so I'll focus on Lincoln in the Bardo as soon as I finish Rocket Men. Rocket Men is about the Apollo 8 mission, the first to orbit the moon, and it is written in a way that makes your heart literally beat faster. I was alive during that Apollo moonshot, although young enough I was unlikely aware of it, but even in spite of the fact that I know it was a success, the reading is stunningly exciting. I will likely finish reading it tonight (mostly because I can barely stand to set it down). If You Come Softly is very short (YA, I think) so I'm sure I'll finish that pretty quickly, too. I'm enjoying it but it's a bit slower paced than I expected.


I almost had myself convinced I wasn't going to get around to reviewing anything at all, last week, and then I finished Princesses Behaving Badly and felt like writing. And, I just continued to sit at the desk till I'd finished writing about Good Behavior, as well. If not for that one day, I probably would have only posted a cat photo because I had a few sleepless nights, last week, and was just not in the mood to read or write much.

Because I had a bad blogging week, I didn't get around to posting my drawing for the cat book I Am the Boss of this Chair. I'll try to get that up, tomorrow. I've never used Rafflecopter, so I have to read up on it to see if that's what I want to use. TV-wise, we hardly watched anything because we were too busy emptying cabinets and replacing old drinking glasses and dishes with new ones (same dish design, although they're more off-white than the originals). I know, so exciting. But, actually, it was kind of fun clearing out all the old stuff -- dishes with cracks and chips that were no longer microwave safe -- with fresh replacements. And, the drinking glasses we had left were just a hodge-podge of leftovers from various sets in which most had been broken, over the years. With the exception of a few one-offs that we're attached to, all of those partial sets of glasses are going to be donated or passed on to Kiddo if he wants any of them. It's nice to start out fresh.


©2018 Nancy Horner. All rights reserved. If you are reading this post at a site other than Bookfoolery or its RSS feed, you are reading a stolen feed. Email bookfoolery@gmail.com for written permission to reproduce text or photos.
Posted by Bookfool at 5:31 PM