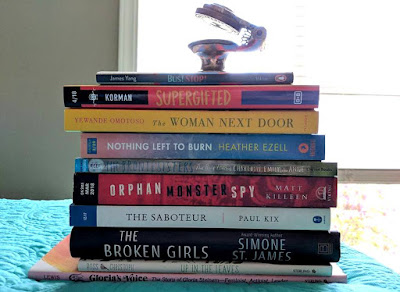 March reads (click on title to read full review, with one exception):

26. The Brontë Sisters by Catherine Reef - A biography of the Brontë family for younger readers (YA, I think) that is comprehensive enough for adults to enjoy and will make the reader eager to read or reread the Brontës. Includes some wonderful photographs to help fill out their story.

27. Black Fortunes by Shomari Wills - The intertwined biographies of the first six black millionaires in the United States. I've struggled with reviewing this book because it faded from memory quickly (also, I didn't get to it soon enough), but I do recall both enjoying it and wishing the stories had been told as separate bios rather than jumping around from one millionaire's story to another.

28. Nothing Left to Burn by Heather Ezell - A wildfire, a mystery (Who set the fire?), guilt, depression, and a relationship that seems outwardly strong but may be dysfunctional are at the heart of this gripping but immensely disturbing YA. I couldn't put it down.

29. The Broken Girls by Simone St. James - Two murderers have left bodies on the same property, near Idlewild Hall: one in 1994 and one in 2014. Are the murders connected? And, does a girl who went missing in 1950 have anything to do with the murders? A wonderful suspense.

30. Orphan Monster Spy by Matt Killeen - A YA set in WWII about a Jewish girl with Aryan features but no papers who is on the run after her mother is killed. After finding a friend who is also in danger, she goes undercover in a Nazi girls' boarding school, charged with befriending a scientist's daughter to find important information about a terrifying new bomb. Another fantastic book.

31. The Saboteur by Paul Nix - The true story of a French aristocrat who joined the Resistance and heroically risked his life on a number of important missions. He also was captured several times. The action scenes are movie-worthy.

32. The Woman Next Door by Yewande Omotoso - The story of two elderly women who hate each other. One is black, one white. Both experienced painful rejection but neither can see what they have in common. When disaster strikes, the women are thrown together. Will they ever learn to get along? A reread and even more wonderful the second time. F2F discussion of this book was amazing.

33. Supergifted by Gordon Korman - A gifted boy, challenging himself by joining a cheerleading squad in the normal school he attends (after being kicked out of the academy for gifted children) pretends to be the hero who stopped a disaster from potentially killing a family when he realizes his friend needs to keep his heroics a secret. But, when his fame gets out of hand and his friendship with the real hero is threatened, what will happen? A smart, funny book for middle readers.

34. Good Behavior by Blake Crouch - Three novellas about Letty Dobesh, a meth addict and thief who wants to break free from her addictions but is constantly tempted and ends up in several very dangerous situations. Loved the tense pacing in these stories.

35. Bus! Stop! by James Yang - A children's picture book about an unnamed boy who misses his bus and then finds that all of the buses that show up at his stop are very, very odd. Low on words, high on fun, each bus that passes is crazier than the last. Absolutely delightful.

36. Up in the Leaves by Shira Boss and Jamey Christoph - The true story (picture book) of a boy who lived in New York City and hated the crowds, so he escaped to Central Park and built tree houses to hide out in. Each year, they were taken down in the fall and each spring he built a newer, more elaborate treehouse, till he was offered a job working in the park, trimming trees. A wonderful story!

37. Gloria's Voice by Aura Lewis - The true story of Gloria Steinem's life for very young feminists, this picture book uses age-appropriate wording for the very young but also includes a more detailed bio and page-by-page descriptions of what's happening in each spread, so that it also offers further information for older children, a really great way to make a book grow with a child.

March was such a fantastic month it's hard to believe. I can't even pick favorites. I pretty much loved everything. Even Black Fortunes, which I found difficult to read because of the way the various bios were intertwined rather than separated, was fascinating and well worth reading. The Saboteur was the other book I found rather slow, because the exciting action scenes were buffered by a great deal of background. But, I'm glad I read them. Everything else was so fantastic there's hardly any purpose to saying much more about them.

At any rate, it was a terrific month for quality. In case you're wondering, the stamp at the top of the book pile is there because Bus! Stop! is a long book but the shortest in height. So, I put Bus! Stop! at the top because of its size but then needed something to weigh it down so it wouldn't topple off the pile.


©2018 Nancy Horner. All rights reserved. If you are reading this post at a site other than Bookfoolery or its RSS feed, you are reading a stolen feed. Email bookfoolery@gmail.com for written permission to reproduce text or photos.
Posted by Bookfool at 2:36 PM