This week's recent arrivals require two separate photos, thanks to the fact that a couple of the books have plastic covers and black spines (and, therefore wouldn't show titles if stacked up). 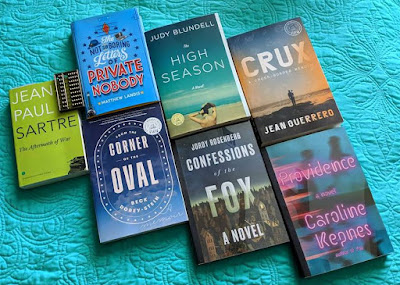 
I don't know how I came to receive that raft of books from Random House (I don't recall entering any drawings, so I suspect they're unsolicited) but it's quite an interesting variety. Of the five, I'm most interested in From the Corner of the Oval, a memoir by a stenographer in the Obama Administration. And High Season certainly looks like a nice, beachy read. The Not-So-Boring Letters of Private Nobody is a middle grade book and I think I'm going to have to read it immediately. It's screaming at me. And, The Aftermath of War is one I ordered after reading some excerpts from the book. I've never read anything longer than an excerpt or letter by Jean-Paul Sartre, but I doubt it will be as challenging as something on the order of Being and Nothingness. 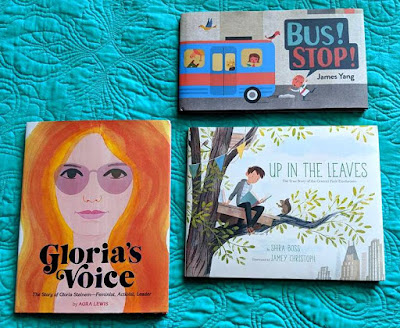 
As always, I sat down to read the children's books the moment they walked in the door. This particular trio is unusual in that I loved all three enough to give them 5 stars. They're all so very different - a fanciful story about a boy who misses his bus, a true story about a fellow who built treehouses in Central Park to escape the city bustle, and the children's bio of a feminist icon. All are terrific in their own ways and I can't wait to share them with you.

While there were nights I didn't read at all (I didn't finish a single book till Thursday night and the book I most wanted to complete is still in progress), the arrival of all those children's books really made my week and Good Behavior was an entertaining, fast-paced read. So, last week ended up being a good reading week, if a bit different than anticipated.


I'm now on Book 2 of Don Quixote. I only sat down with Don Quixote twice and it took a while to warm to the second book, but I read 100 pages. So, that's good. And, I'm 2/3 of the way through Princesses Behaving Badly. It was the book I wanted to finish, last week -- what I call my "focus book" of the week -- and I enjoyed the reading but sometimes I needed to let one or two of the bios roll around in my head. So, it's not the quickest read and at some point I decided, "Eh, whatever. I'll finish when I finish." I'm not far into Lincoln in the Bardo at all. That one fell by the wayside. No hurry; I have two weeks to finish reading it before discussion. And, I started Look for Her, last night, because I wasn't in the mood for any of the other books I'm reading. The pages are flying and I needed the feeling that I'm accomplishing something in my reading, so I'm glad I picked it up.

Not a big posting week, but it didn't matter at the time. I only had a single book left to review on Thursday. And, then I finished Good Behavior and the children's books arrived. The concept of "catching up on reviews" is such an elusive thing, isn't it?

I finished the William Hartnell Dr. Who episodes and have moved on to Doctor #2, Patrick Troughton. I am loving Patrick Troughton and his companion, Jamie, so far. There were so many missing episodes in the final William Hartnell season that two of the companions only can be seen in a single episode (Polly and Ben), which is disappointing because it didn't take long to fall for Ben. And, the transition from Hartnell to Troughton is completely missing. But, I liked Troughton from the get go. He's a much more upbeat Dr. Who than Hartnell and lacks the arrogance of the first incarnation.

I learned a bit of bookish trivia while looking up various companions, this week. Dr. Who's Jamie, who came from 18th century Scotland and wore a kilt, was the inspiration for Jamie Fraser in Diana Gabaldon's Outlander series. She was unaware that the actor's first name was Frazer when she named him, but liked the look of a man in a kilt and the time period and location from which he hailed, so that was the genesis of her hero. How cool is that?


©2018 Nancy Horner. All rights reserved. If you are reading this post at a site other than Bookfoolery or its RSS feed, you are reading a stolen feed. Email bookfoolery@gmail.com for written permission to reproduce text or photos.
Posted by Bookfool at 3:04 PM