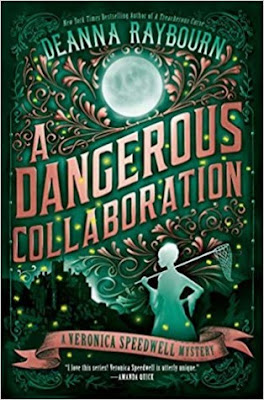 A Dangerous Collaboration is my first Veronica Speedwell mystery and it's the 4th in the series. You never know how that's going to turn out, starting in the middle of a series. Will it stand alone or be wrought with uncomfortable gaps that make little sense to those who missed out on the earlier entries? Will you be tempted to return to the beginning of a series or decide that it's not for you?

Well, no worries. I loved A Dangerous Collaboration practically from page 1 and it stands alone well. Occasionally, the author adds an asterisk that leads to the title of a book (or several titles) in which mentioned adventures occurred, but there was never a single moment that I felt lost or as if the explanation of past events was in some way lacking.

In A Dangerous Collaboration, Veronica is invited by her business partner Stoker's brother, Lord Tiberius Templeton-Vane, to travel along to an island off the coast of Wales. There, he is to stay with his long-time friend, Malcolm Romilly, and various members of Romilly's relatives in the family's castle. Stoker is told by Tiberius that he's unwelcome, but Stoker's curious and maybe a little jealous, so he tags along, separately. Veronica is to pose as Lord Templeton-Vane's fiancée because it would be unseemly for them to travel alone together, otherwise.

On the island, Veronica and Stoker discover that there is a mystery afoot. Three years ago, Malcolm Romilly married and on the evening of the wedding his bride unaccountably disappeared. Nobody ever figured out if she even left the island. Did she run away? Did she have an accident or was she killed? Malcolm has discovered a clue and Veronica is determined to uncover what became of Rosamund.

Highly recommended - It was the setting, the characterization, and the denouement that I loved best about this book. A castle on an island with priest holes and tunnels? I'm in. The mystery was one that couldn't be solved by the reader, although one could guess, I suppose. I didn't care about that. I found that I loved being immersed in the world to which Deanna Raybourn took the reader and I liked Veronica and Stoker. The other characters had enough dimension and mystery about them to convince this reader it was pretty much possible that anything had happened and most everyone bore a touch of guilt. I definitely plan to seek out the beginning of this series and hope to see what becomes of Speedwell and Stoker in future releases.

I received a copy of A Dangerous Collaboration from Berkley Books in exchange for my unbiased review. My thanks to Berkley/Penguin Random House.

©2019 Nancy Horner. All rights reserved. If you are reading this post at a site other than Bookfoolery or its RSS feed, you are reading a stolen feed. Email bookfoolery@gmail.com for written permission to reproduce text or photos.
Posted by Bookfool at 10:25 AM