The Threat by Andrew McCabe 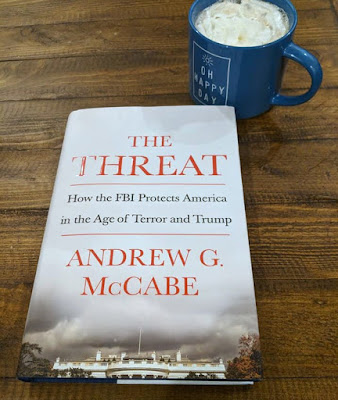 That day, North Korea was on the president's mind. North Korea had recently conducted a test of an intercontinental ballistic missile, potentially capable of sriking the U.S. -- Kim Jong-un had called the test a Fourth of July "gift" to "the arrogant Americans." But the president did not believe it had happened. The president thought it was a hoax. He thought that North Korea did not have the capability to launch such missiles. He said he knew this because Vladimir Putin had told him so.


I'm not actually sure what possessed me to order a copy of The Threat by Andrew G. McCabe. I've ordered a few political books, in the past year or two, but I'm not all that hot about getting to them. However, The Threat turns out not to really be a book about politics but a memoir, although McCabe certainly describes the Trump administration from his viewpoint and experience, including his direct interactions with the president and staff. It is, however, about Andrew McCabe's time in the FBI -- how he made the decision to go from a high-paying job as a lawyer to a much lower-paying job as an FBI agent, for starters. It describes his training and various cases that he was involved in during his FBI years. Yes, he does mention Trump and the dangers he believes this president is causing. But, it wasn't the defensive work of writing that I anticipated.

There were two things that really jumped out at me. One was that Andrew McCabe's early years were spent working on investigating the mafia, including the Russian mafia. I think I'd read that somewhere, but it didn't sink in till I read it a second time and in the words of McCabe, himself, and then it was a bit of an "A-ha!" moment. If, as many people have said, Trump is truly involved with Russian money laundering (I've been reading about that for years, long before he ran for president -- his connections with Russia are nothing new), it makes sense that he'd want to keep McCabe out of the top FBI job, doesn't it?

The other thing that jumped out at me was his description of his work after 9/11. On the day of the terrorist attacks, McCabe was posted in New York City but he was away from the office when the first tower was hit. His response was to drive into Manhattan, lights flashing, turn in his FBI vehicle, and get to work. Eventually, the people in the Manhattan office had to be moved because the dust from the Twin Towers was causing problems with ventilation. Truly, anyone who drove into the horror for the sake of American security is a hero to me, whether an emergency responder or a desk jockey.

I think perhaps the most important tidbit of information is one that most everyone has probably heard, by now, but which is described in better detail by McCabe than I've seen elsewhere and that is the president's complete inability to even listen to and process the daily security briefings. I'm recalling this without any reference (I didn't mark his descriptions of the briefings and don't even remember if he was present or he described this secondhand) but what he said was that on one particular occasion, not only did the president not absorb what he was being told but he only let the people briefing him talk for a minute or two and then spent the rest of the time talking, himself, about things that were totally irrelevant to security. The problem with that is, of course, that the president needs to have a complete understanding of the threats to our nation and be able to make quick decisions in the event of an emergency. McCabe has no confidence at all in his ability to respond to a national emergency with the knowledge and understanding needed.

Highly recommended - Personal opinion: every American needs to read The Threat. It's very well written and compelling information about how the FBI works, some of the cases they've solved (those McCabe worked on, specifically), security issues we face as a nation, and why our current president is endangering us. McCabe doesn't spend a lot of time defending himself from the president's accusations but the final chapter is a little emphatic. And, when relevant, he describes how the current administration treats members of various agencies and the reasons he considers the administrations actions a danger. McCabe also describes how right-wing "news" stories that are completely fabricated are being accepted by main-stream news as facts, constantly putting agencies in a defensive posture. It's a book that will unnerve you -- not just because of the dangers Trump poses but because of close calls with terror that McCabe describes. But, in general, it really is just a typical memoir and a very good one.


©2019 Nancy Horner. All rights reserved. If you are reading this post at a site other than Bookfoolery or its RSS feed, you are reading a stolen feed. Email bookfoolery@gmail.com for written permission to reproduce text or photos.
Posted by Bookfool at 11:14 AM