The Last Year of the War by Susan Meissner 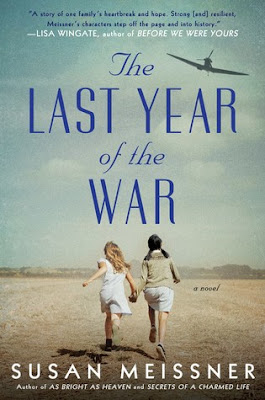 The Last Year of the War by Susan Meissner is about two girls who meet in an internment camp during WWII. Elise Sontag's father is a German immigrant who has been in the country for nearly 20 years. Neither he or his wife thought there was any urgent need to become American citizens. Elise and her brother were born in America and have never learned any German. 5 random things lead to Mr. Sontag being accused of siding with Germany in the war and he's arrested. Without his income, things slowly go downhill for Elise's family and eventually Mr. Sontag asks to be transferred to Crystal City Internment Camp in Texas to be reunited with his family.

Mariko's parents are Japanese immigrants and, like Elise, Mariko is as American as apple pie. But, she's from California, where all of the Japanese Americans have been rounded up. First taken to Tanforan, an internment camp at a race track where horse stalls served as their homes, the Inoue family eventually ends up in Crystal City.

Elise and Mariko meet at Crystal City's American school and their friendship is immediate and deep. They have much more in common than differences. But, their friendship eventually ends when, for different reasons, both of the families end up being repatriated to their home countries and then Mariko's family cuts off communication when she's forced to marry in Japan.

As the book opens, decades later, we find that Elise has Alzheimer's and knows it will eventually kill her. Elise's friendship with Mariko was one of the most important of her life and she has always been sad that they weren't able to keep in touch. She decides to look for Mariko and is helped by a young housekeeper who teaches her how to use Google. On impulse, Elise buys a ticket to San Francisco to meet Mariko's daughter and writes a reminder note on her arm, knowing that she may need help remembering where she's headed.

The story then returns to the story of Elise and her family, how her German father was arrested, the family's struggles, and how Elise and Mariko met. While the storyline does go back and forth between the historical and modern parts of the storyline, the bouncing back and forth is minimal. Most of the focus is on the historical storyline and the denouement takes place during Elise's journey to find Mariko.

Highly recommended - Wonderful characters, well-described historical settings, and a truly meaningful, beautiful story of friendship made this a 5-star read. The Last Year of the War has rocketed to the top of my favorites list for 2019. It's beautifully told, believable, and accurate to what I've read about the internment camps. In fact, there was even a little crossover with Learning to See by Elise Hooper, a book I just reviewed about 10 days ago, because Dorothea Lange (the subject of Learning to See) photographed and was horrified by the conditions at Tanforan, the camp at which people were originally housed in smelly horse stalls.

Elise (the character, not the author of the other book) is the narrator. She's an only child whose friends abandon her when her father is arrested and there is nothing more important to Elise than having someone to connect with. Her anguish is visceral during the times when she's friendless and the depth of meaning of friendship to her is immense. I couldn't count the number of times I teared up; so many heartbreaking moments for Elise. I loved both the historical and contemporary parts of The Last Year of the War equally -- which is extremely unusual. I expected a predictable storyline with the typical balance of historical and contemporary storylines. But, The Last Year of the War is far from trite and predictable; it's surprising in many ways.

I received a copy of The Last Year of the War from Berkley Books for review and every time I think of it I want to clutch the book to my chest, I love it so much. Many thanks to Berkley/Penguin Random House for the review copy.